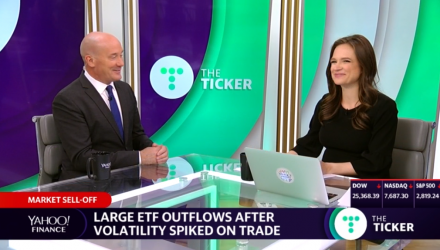 ETF Trends CEO Tom Lydon appeared on ‘Yahoo Finance Live’ on Monday to explain why the trade spat may be a good time to buy, with Yahoo Finance’s Seana Smith on “The Ticker”.

Lydon pointed out that when investors look at the fourth quarter of 2018, there was $200 billion of mutual fund outflows while there was $50 billion of inflows into ETFs, even with the markets down.

“We’re seeing a little bit of divergence of behavior between mutual fund investors and ETF investors,” Lydon told Smith on Yahoo Finance Live. “I wouldn’t be surprised, like many of the corrections that we’ve seen the past five years, that this is a buying opportunity. You can look around the world and you can get some stocks and the ETFs that represent them pretty cheap.”

Asked why more investors are turning to ETFs, Lydon responded that expense ratios are lower and they aren’t taxed as much as mutual funds.

“Those who have shifted to ETFs in the past 10 years can really construct diversified portfolios,” he said. “Active management has not worked as well. Right now in these types of environments, who can see these potential pitfalls that come just with a tweet, and all of a sudden, you need to sidestep the market. I think investors have longer term outlooks.”

If you are a long-term investor, Lydon said “you have to stay invested.”

“But you don’t have to keep buying what you’ve bought in the past,” he said. “Most investors in the U.S. have a home country bias where way too much of their allocation is to U.S. stocks. Look at some of the opportunities in developed markets and emerging markets where you can get them almost half off from a PE ratio standpoint. For emerging markets, we know they are affected by China, we know they are affected by trade, but there are some really good diversified ETFs out there that eventually will return to the mean from a valuation standpoint. Ten years ago it was a riskier bet, but today if you are buying stocks, think about what’s going on in emerging markets: their technology has got up to speed along with their accounting systems. They want money, so in order to get money, they have to be respected by developed, global markets. It’s much more different today.”