You are at:Home»Equity ETF Channel»These Space Stocks Are Going to the Moon 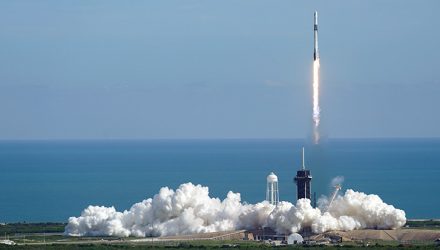 These Space Stocks Are Going to the Moon

I’m sure all of you have heard of ARK Invest founder, CEO, and CIO Catherine Wood.

She is a crowd favorite at Mauldin Economics’ annual Strategic Investment Conference. (Mark your calendar for May 5‒14, 2021, and stay tuned to your email for details about this year’s virtual event.)

Catherine is also one of the world’s greatest investors. Her flagship fund, the ARK Innovation ETF (ARKK), was the best-performing actively managed ETF in the world last year.

First, you won’t find many actively run ETFs like this in the market, especially one with a triple-digit gain like the 148% ARKK returned in 2020.

Second, you’re not going to find the same kind of staid, “safe” stocks that anchor traditional investors’—and a lot of fund managers’—portfolios.

With such strong performance, it’s no surprise her assets under management grew tenfold to become the largest active ETF in the world… just six years after she launched it.

ARKK is already up 18% in 2021. And with technology set to be 2021’s top-performing sector, there’s likely a lot more upside in store.

But if you want real “moonshot” potential, well, there’s about to be an ETF for that, too.

The ARK Space Exploration ETF (Pending: ARKX) will hold companies at the forefront of one of the fastest-growing industries on the planet.

A lot has changed in the half-century since Neil Armstrong first stepped on the moon.

The government is still in the game, but the private sector is breaking into the space race in a big way.

Some 80% of this spending came from private industry. That is, the companies that build everything from satellite systems to deep-space rocket technology to specialty suits designed for astronauts in flight.

This growth has been explosive, and it shows no signs of slowing down.

Less Than 20 Years to a $1 Trillion Space Industry

Morgan Stanley expects the global space industry to generate over $1 trillion in revenues by 2040.

A large chunk of this growth will come from US military spending.

Military spending is expected to reach $738 billion next year. That’s 20% of the entire federal budget.

Not even the current coronavirus recession should cause the US government to scale back on defense spending. It has actually grown during the last six recessions:

And while broader defense spending looks to be rising steadily…

It established a new, uniformed branch of the military known as Space Force. And it earmarked $23 billion for space-related projects in the current budget.

That was up 63% from the previous year:

And because 100% of this money will be spent on US companies, owning space-related stocks and ETFs is the ultimate way to “buy American.”

These Satellite Makers Are Set to Stay in Orbit

According to the Satellite Industry Association, satellite manufacturing is a $20 billion marketplace on its own. It’s dominated by large aerospace conglomerates like Boeing (BA):

Boeing is an obvious beneficiary. Yet it only generates a small part of its sales from space technology.

There are better ways to profit from the new space race…

In addition to satellite manufacturers, you also have companies that operate and service these satellites once they’ve gone into space.

One such company is Iridium Communications (IRDM).

These are mission-critical systems that need real-time access 24/7. The US government is a reliable client; so are other governments, businesses, and individuals around the globe.

IRDM doesn’t pay a dividend. But there are plenty of companies in this stock universe that do…

These 2 Dividend Payers Are out of This World

Most pure-play space stocks are small, fast-growing companies. That means they just don’t have extra cash left over each quarter to reward their investors.

However, I’ve found a duo of dividend payers that benefit directly from space technology…

The first is the world’s largest telecom company, AT&T (T).

AT&T is ingrained in the space industry. It is even working with NASA to improve the Deep Space Network, which supports communications during interplanetary space missions.

When it comes to dividend payers, it’s hard to top AT&T. The company is a Dividend Aristocrat, meaning it has increased its dividend for more than 25 years in a row. In AT&T’s case, it has raised its payout for 35 years in a row.

Then there’s Garmin (GRMN), which you might remember for its bulky GPS consoles.

That was lightyears ago. Since then, the company has picked up significant exposure to the space industry. Last year, 20% of its sales were from aerospace.

And with a 2.7% dividend yield, the company is a solid dividend option for income investors.

But it’s not my top option. My Yield Shark subscribers know there’s one aerospace and defense company that rises above the rest. With a dividend yield that’s twice that of the 10-year Treasury bill, it’s a great option for any income investor’s portfolio. Click here to unlock this stock today.