Popular lower volatility ETFs have recently recaptured some of lost assets. SPLV and USMV pulled in $1.1 billion million and $1.0 billion of net ETF inflows, respectively in the one-month period ended November 19. With the new money, $9 billion SPLV has erased all but $147 million of its year-to-date net outflows, while the larger USMV has narrowed the redemptions to $7.9 billion. For most of 2021, the two lower-risk ETFs were out of favor as investors poured a record $585 billion of new money into equity ETFs thus far in 2021. Heading into the final stretch of a strong year, with the S&P 500 Index up 27% for the year, we think is reasonable that investors want to reduce the risk profile of portfolios while staying committed to large-cap stocks. In addition, these two popular smart-beta ETFs rebalance in November. However, due to their unique approaches, turnover and sector exposures will likely be distinct.

SPLV added some Information Technology and removed some Health Care stocks last week. SPLV holds the 100 least volatile stocks in the S&P 500 Index, regardless of sector representation, on a quarterly basis. Compared to USMV that has sector constraints, SPLV has typically had more exposure to defensive, yet smaller sectors such as Consumer Staples and Utilities and less exposure to larger more cyclical sectors such as Information Technology.

However, in the latest reconstitution at the end of last week, SPLV bought CSCO and MSFT to boost the tech sector’s weighting to 9% of assets. These stocks joined Automatic Data Processing (ADP), Motorola Solutions (MSI), Paychex (PAYX), and others as ETF holdings. While the technology stake remains far less than USMV’s 26% weighting, it should help SPLV’s future returns if the sector performs well into 2022.

Meanwhile, S&P 500 health care sector constituents Cooper Companies (COO) and Medtronic (MDT) were among the companies sold from SPLV as the sector weighting dropped to 12%, from a prior 15% of SPLV’s assets. Following the rebalance, SPLV continued to have hefty stakes in Consumer Staples (20%) and Utilities (20%). USMV is set to be reconstituted at the end of November, but we expect limited changes at the sector level, although some changes are likely at the stock level since USMV has not rebalanced since May. 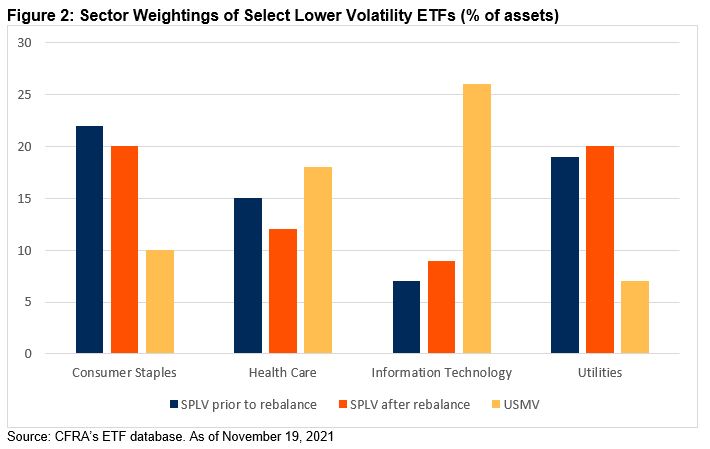 SPLV and USMV have lagged the broader market in 2021 as expected, but both ETFs look appealing heading into 2022. Despite being constructed differently, SPLV and USMV have each generated a 16% year-to-date total return, which trails the gain for the broader U.S. equity market. Due to a preference for less volatile securities, these ETFs tend to lag in a bull market, but protect the downside during corrections. While CFRA still sees the S&P 500 climbing only modestly over the next year—our 12-month target price is 4,870—SPLV and USMV earn CFRA four star ratings due to favorably low risk profiles and modest costs. USMV has the cheaper expense ratio of the pair at 0.15%, but we think SPLV’s 0.25% is also reasonable. In addition, both ETFs trade closely in line with the net asset value.

While some index-based ETFs are largely static and make infrequent unplanned changes or are refreshed once a year, others like SPLV undergo more frequent and well-planned changes. Since we believe an ETF’s prospects are in part tied to what is inside the portfolio and not just its performance record, we focus on what is going in and coming out of popular ETFs.