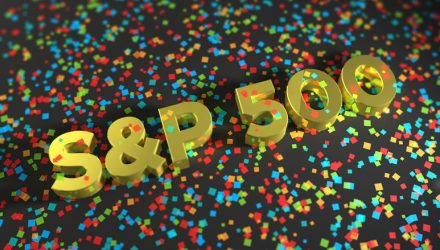 The S&P 500 notched a new record closing high on Wednesday. U.S. markets and stock ETFs advanced late in the day after the Federal Reserve cut interest rates again but signaled it will hold off any more monetary policy changes for the rest of the year.

The equity market was flat for most of Wednesday’s session before picking up speed late in the day after Fed Chairman Jerome Powell revealed a more upbeat economic outlook during a press conference, the Wall Street Journal reports.

Powell attributed the rosier outlook to the somewhat improved relations between the U.S. and China, the U.K.’s push toward a split from the European Union and the U.S. economy’s strength despite some pockets of weakness.

“There’s plenty of risk left, but I have to say the risks seem to have subsided,” Powell said.

The Fed also cut interest rates by another 25 basis points or more-or-less in line with market expectations.

“The market certainly was expecting the 25-basis point rate cut. That is what we got,” Michael Arone, Chief Investment Strategist at State Street Global Advisors, told Reuters. “The reaction of the markets today and rates suggest investors are concluding, rightly or wrongly, that the Fed is close to being done with their cuts.”

While the Fed indicated it may hold off on further rate cuts for the rest of the year, Powell said the central bank isn’t considering rates hikes right now and that the Fed’s “current stance of policy is appropriate.”

“Without explicitly stating, the Fed appears to be on hold from cutting rates further in the near term as some of the downside risks that provoked the series of rate cuts look to be somewhat contained,” Charlie Ripley, a senior investment strategist at Allianz Investment Management, told the WSJ.