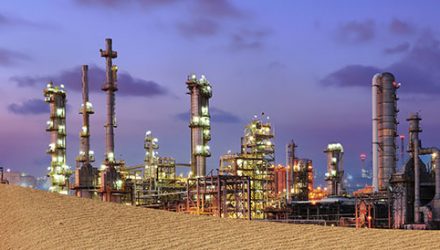 Should You Buy the Saudi Aramco IPO?

Imagine waking up in your posh high-rise penthouse facing the Red Sea. Above the bustling city hangs a giant artificial moon that livestreams images from outer space. You call for an automated flying taxi, and it carries you to your job genetically modifying humans to make them stronger. When you return home in the evening, you find that robot maids have made a thorough cleaning of the place. Later, you decide to step out for the night at one of the city’s many five Michelin star restaurants, followed by a visit to the robot dinosaur park.

Sound like science fiction? Maybe. But believe it or not, this is the future envisioned by Saudi Arabia’s crown prince, Mohammad bin Salman Al-Saud. Everything I described above is lifted directly from his plans for a brand new city.

As ambitious (crazy?) as bin Salman’s plan sounds, it’s already moving forward. Bloomberg reports that the kingdom has awarded two Saudi construction firms with contracts to begin building housing for workers.This “land of the future,” called Neom, is to be built on a Massachusetts-size area of barren desert along the Saudi kingdom’s northwest coastline. Its goal is not only to attract “the world’s greatest minds and best talents,” but also to lure international tourists and luxury travelers.

Altogether, the cost to bring Neom to fruition will run an estimated $500 billion—which has some investors sweating. This year the oil-rich kingdom’s budget deficit has widened further to around 7 percent of its gross domestic product (GDP), according to the International Monetary Fund (IMF).

So where does bin Salman, also known as MBS, expect to come up with this cash?

Do I even need to say it?

It may be no coincidence that at the same time that construction starts on Neom, Saudi Arabia is finally set to sell shares of its national oil company, Saudi Aramco. Coincidence or not, the timing is interesting.

Early last week, the kingdom’s Capital Market Authority announced that, after years of speculation, Aramco will at long last begin trading on the Saudi Stock Exchange, or Tadawul, sometime next month. The energy giant is the world’s most profitable company—in 2018 it generated a mind-boggling $111 billion in net income and some $86 billion in free cash flow. And with a valuation of between $1 trillion and $2 trillion, it’s worth more than the entire $550 billion Saudi equity market.

In fact, at the low end of that valuation, Aramco “will still be worth more than all Brazilian stocks, and the top valuation would make it worth more than Korean, Australian, Swiss or German stocks,” writes the Wall Street Journal’s James Mackintosh.

He adds: “This is an asset class all on its own.”

Indeed, there’s a lot that, on the surface, is enticing about Aramco as an investment. Consider the dividends alone. According to the summary prospectus, Aramco intends to pay out an incredible $75 billion in cash dividends next year. Not only does that amount to a potential 5 percent yield per share, but it’s almost 30 times more than the $2.6 billion Apple distributed to investors in 2018.

As for production, it has the world’s largest oil reserves for any one company, and its cost for extracting the stuff is a low, low $2.80 per barrel, far less than any of its rivals.

The IPO also comes just a few months after Saudi Arabian stocks were finally included on the MSCI Emerging Markets Index, giving a greater number of global investors exposure to the oil-rich kingdom.

But Should You Invest?

Despite all this, Aramco may have a hard time convincing foreign investors to look past some of the significant drawbacks.

For one, shares will only be available to buy on the Tadawul in Riyadh—for now, anyway. Second, the public float will be in the neighborhood of 2 percent of shares, making this a relatively small public debut for such a massive company. Depending on the company’s final valuation, and depending on the percent of shares it ends up listing, Aramco could end up making between $30 billion and $51 billion in this round of fundraising. That’s according to estimates by Ellen R. Wald, author of the 2018 bestseller Saudi, Inc.: The Arabian Kingdom’s Pursuit of Profit and Power.

The rest of the shares will be owned, of course, by the crown prince and the House of Saud. This is an absolute monarchy we’re talking about, after all, and so global investors should not expect to have any shareholder rights. Aramco’s board of directors will have a fiduciary duty not to investors but to MBS and any future monarch. This has some serious implications.

In the past, the monarchy has used Aramco as a piggy bank, dipping into its vast coffers to finance any number of pursuits and projects. As Ellen Wald puts it in a recent New York Times op-ed:

“The money raised from the Aramco IPO, and any subsequent offerings, will not go to the company. It will go to Saudi Arabia—to the king and his government. And every subsequent purchase of Aramco shares will raise the value of the company just a little, further enriching the king.”

And getting him closer to realizing the futuristic city of Neom.

OPEC Cuts on Deck While U.S. Shale Could Be Headed for a “Major Slowdown”

According to reports, Aramco’s growth assumptions and basis for such a generous dividend package are predicated on Brent crude prices at or above $65 a barrel, a level last seen in September. The average price for a barrel of oil for the three-year period through November 8 is just shy of $63.

In an attempt to prop up prices before its IPO, Aramco has been making production cuts for the better part of a year, and at next month’s OPEC meeting, Saudi Arabia is expected to push for additional cuts from fellow oil-exporting members. Output could collectively be lowered by some 1.2 million barrels a day.

Meanwhile, U.S. shale production has only continued to rise thanks to advances in fracking technology, helping to keep global crude prices in check. In August, the most recent month of data, American producers pumped out a record 12.4 million barrels a day, an amazing 128 percent increase from a decade earlier. Last year, the U.S. industry was producing an extra 2 million barrels a day compared to 2017.

That explosive growth, however, could be headed for a “major slowdown,” according to a new report by IHS Markit, the same people who put out the monthly purchasing manager’s index (PMI). Shale production growth next year will be only 440,000 barrels a day, the group says, down significantly from 2 million barrels a day. Output will slow even more before “essentially flattening out in 2021.”

“The combination of closed capital markets and weak prices are pulling cash out of the system,” LeBlanc comments. “Investors are imposing capital discipline on exploration and production (E&P) companies by pushing down equity prices and pushing up the cost of capital on debt markets.”

This is both good and bad news for Aramco. Oil prices could surge above $65 with even more product coming offline, but at the same time, the company could run into challenges attracting investors.

Are You Underinvested in Gold?

A couple of weeks ago, I wrote an article called “You’re Probably Underinvested in Gold.” The response from readers was very positive, and on Friday, the article was retweeted by none other than the World Gold Council (WGC). I’d like to extend a sincere thank you for the recognition!

If you missed the article the first time, you can check it out by clicking here.

The MSCI Emerging Markets Index captures large and mid-cap representation across 26 Emerging Markets (EM) countries. With 1,202 constituents, the index covers approximately 85% of the free float-adjusted market capitalization in each country. The Purchasing Manager’s Index is an indicator of the economic health of the manufacturing sector. The PMI index is based on five major indicators: new orders, inventory levels, production, supplier deliveries and the employment environment.

Free cash flow (FCF) is a measure of how much cash a business generates after accounting for capital expenditures such as buildings or equipment. This cash can be used for expansion, dividends, reducing debt, or other purposes.

Holdings may change daily. Holdings are reported as of the most recent quarter-end. The following securities mentioned in the article were held by one or more accounts managed by U.S. Global Investors as of (09/30/2019): Chevron Corp., Equinor ASA, Royal Dutch Shell PLC.