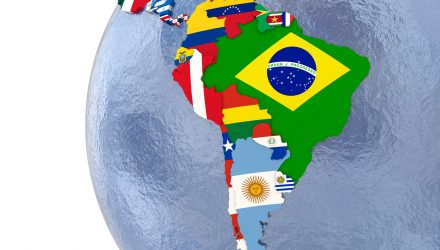 Stocks in Latin America and the related exchange traded funds are participating in this year’s emerging markets rally. In fact, some Latin American markets and funds are leading that rally, but some risks remain for the region’s equity markets.

The iShares Latin American 40 ETF (NYSEARCA: ILF), which is heavily allocated to Brazil and Mexico, is up about 15.35% this year. Brazilian assets can be more appealing with the help of a weaker dollar and stronger commodities prices. The Brazilian real has been one of the better-performing emerging markets currencies this year.

“Latin America should experience a mild recovery in 2019, but growth rates will be uneven and the region faces a number of macroeconomic and political risks that could exacerbate sovereign vulnerabilities,” said Fitch Ratings in a note out Tuesday. “Potential risks include tighter external financing conditions, persistent fiscal challenges, trade protectionism, commodity price volatility and political challenges to economic reform.”

The outperformance in Brazil’s market comes as investors anticipate key reforms, such as pension reforms, in the coming months under the new President Jair Bolsonaro, CNBC reports.

Furthermore, Brazilian stocks are expected to strengthen on the slowdown in U.S. Federal Reserve rate hikes, which is also expected to boost broader emerging markets as the U.S. dollar loses its support. Brazil’s market is also expected to benefit from a privatization and deregulation under the Bolsonaro administration.

“The region is experiencing some positive trends including generally improving economic growth, contained inflation and current account deficit adjustment,” according to Fitch. “However, fiscal challenges remain pronounced. Latin America has had generally larger fiscal deficits and general government debt than other emerging market regions in recent years, and we expect this to continue in this year. Furthermore, general government foreign currency debt has increased markedly over the past five years. Some countries in the region are engaging in fiscal consolidation plans, but there is a high degree of uncertainty regarding implementation given potential political risks and forthcoming elections.”