You are at:Home»Equity ETF Channel»Pressure on Turkey ETF Mounts as Country Mobilizes Military 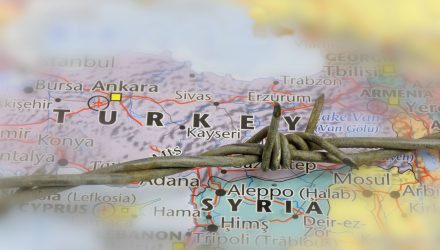 Since Monday’s trading session, the  iShares MSCI Turkey ETF (NasdaqGM: TUR) has fallen 7% as the country begins to mobilize its armed forces in preparation for a military operation in Northern Syria. Turkish President Recep Tayyip Erdogan confirmed the move via Twitter.

“Turkish Armed Forces together with the Syrian National Army against PKK / YPG and Deash terrorist organizations in northern Syria has started,” Erdogan wrote on Twitter.

“Our aim is to destroy the terror corridor which is trying to be established on our southern border and to bring peace and peace to the region,” Erdogan tweeted.

“With the Operation Spring of Peace, we will eliminate the threat of terrorism towards our country. Thanks to the SAFE ZONE we will establish, we will ensure that Syrian refugees return to their countries. We will protect the territorial integrity of Syria, and free the people of the region from the clutches of terror,” Erdogan added.

Turkish officials were already discussing the move early in the week. President Erdogan spoke with U.S. President Donald Trump where the latter agreed to pull U.S. forces out of the area with the White House saying  “Turkey will soon be moving forward with its long-planned operation into Northern Syria” and “United States forces, having defeated the ISIS territorial ‘Caliphate,’ will no longer be in the immediate area.”

“Turkey will soon be moving forward with its long-planned operation into Northern Syria. The United States Armed Forces will not support or be involved in the operation, and United States forces, having defeated the ISIS territorial ‘Caliphate,’ will no longer be in the immediate area,” said White House press secretary Stephanie Grisham following the call.