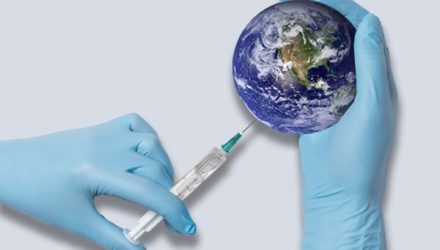 Pfizer and Moderna Give Investors a Shot of Hope

America, and the world, received another huge shot of hope this week.

Today at the open, travel and hospitality stocks led a broad-based rally, with Carnival, Norwegian Cruise Lines and United Airlines trading near the top. Meanwhile, stay-at-home stocks like Clorox, Domino’s Pizza and Amazon.com sold off.

The story was the same last Monday, following Pfizer’s announcement. The best performing S&P 500 stock for the day was Carnival, up nearly 40%. Hawaiian Airlines cruised the highest among airline stocks, up an incredible 50%. Only three airline stocks —Singapore Airlines, Air Transport Services and Cargojet—were down for the day. 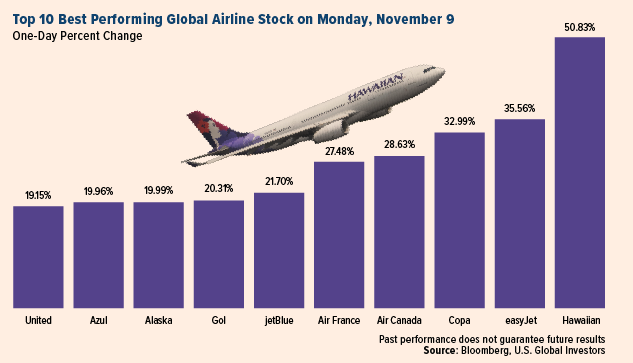 Goldman Sachs was quick to adjust its market forecast for the next 12 months. The investment bank sees the S&P hitting 4300 by the end of 2021, which is an increase of 20% from Friday’s close. 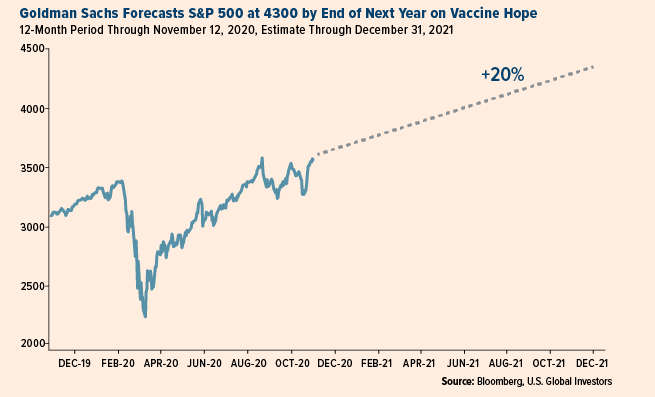 Investors’ enthusiasm was tempered last week by the realization that Pfizer’s vaccine, although effective, has a couple of serious drawbacks that may prevent it from having a wide reach globally. One, the vaccine requires two doses a month apart, and it’s reasonable to expect that a large percentage of people who showed up for the first shot will not return for the second shot, for various reasons.

And two, the vaccine must be stored at an incredibly frigid -94° Fahrenheit. That’s colder than the average temperature observed at higher elevations in Antarctica’s icy interior. Most countries on earth, including some developed countries, simply do not have the appropriate cold storage, not to mention the supply chain infrastructure, to transport and deploy the vaccine to everyone who needs it.

According to CLSA’s estimate, as much as 50% to 60% of the population needs to be inoculated to stop the pandemic, though some estimates are even higher at between 70% to 75%. “Reaching this level of immunization will not be easy,” the investment group says.

By comparison, Moderna’s vaccine, while it also requires two doses, remains stable at 36° to 46°F, “the temperature of standard home or medical refrigerator, for 30 days” according to a press release.

It wasn’t just cruise lines and airlines that jumped on the Pfizer news last week. Luxury stocks like Burberry, Kering and Christian Dior all made strong gains on the hope that international travelers—particularly big-spending Chinese travelers—will soon return to airports and take advantage of duty-free shopping between flights. 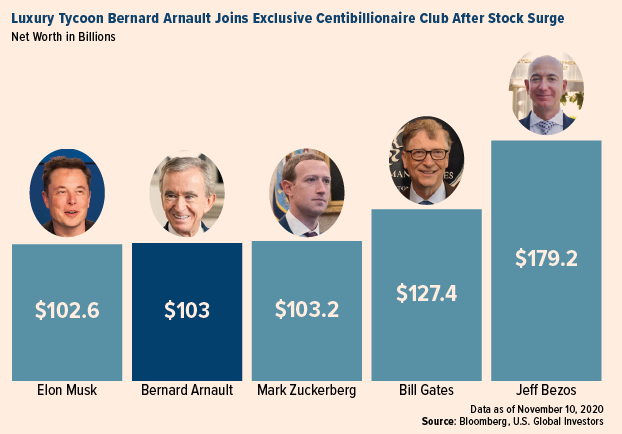 The same goes for competitors Hermes and Kering, both of which delivered forecast-beating sales in the third quarter, thanks in large part to Asian consumers.

Retailers are right to court Asian consumers, particularly Chinese consumers. For proof, look no further than Alibaba’s monster Singles Day sales event last week. In the first 30 minutes on November 11, the giant Chinese retailers did a jaw-dropping $56.3 billion in sales, more than last year’s total haul of $38 billion over a 24-hour period.

Indeed, China has the world’s largest share of people online, and that share is accelerating. As of October, the country represented 40% of global ecommerce transactions, according to a report by the Brookings Institution.

Brookings’ report also provides startling new data on the size of China’s (growing) middle class, something I’ve written about before. Every year, the country has been adding an average of 60 million people to its middle class—defined as those who spend between $11 to $110 per person per day—and by 2027, Brookings believes the total size of China’s middle class could top 1.2 billion people. That’s approximately 3.5 times as many people living in the U.S. right now.

With the combined spending power of $41 trillion, the Chinese middle class is on track to spend an astonishing $7.3 trillion this year alone, Brookings says. To help put that figure in perspective, 7.3 trillion seconds is the equivalent of more than 230,000 years. That long ago is around when scientists believe Neanderthals appeared in Eurasia. 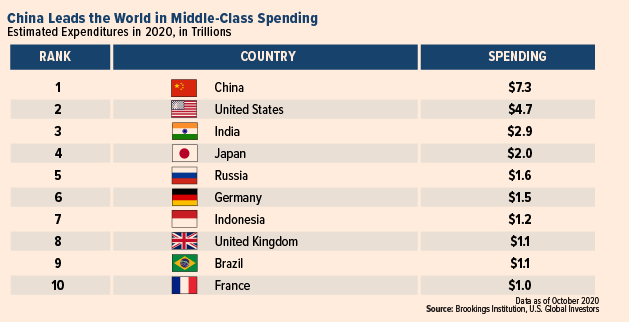 As I’ve said before, I’m pleasantly surprised with how well some luxury retailers have done during the pandemic. Back in July, I discussed how sales at home improvement stores were increasing as high-net worth individuals (HNWIs) were spending their lockdowns on do-it-yourself (DIY) projects, renovating their homes, building back patios and installing swimming pools.

Last week we got even more proof of home improvement’s retail dominance. Placer.ai is a startup that provides retailers with foot traffic analytics and predictive consumer behavior. In a blog post titled “Kings of 2020: Home Improvement,” the group shared findings showing that foot traffic in Home Depot and Lowe’s has actually grown most months during the pandemic compared to the same months last year.

Look at the month of May. Lowe’s saw an almost 50% increase in store visits versus May 2019. Home Depot had 26% more. Although there’s been some slowdown, foot traffic is still substantially up year-over-year. Visits also accelerated from September to October as we head into “what could be an enormous holiday season for these chains,” as Placer.ai’s Ethan Chernofsky writes.

The price of gold fell 4.5% last Monday, its biggest one-day drop since August. But don’t worry—gold’s daily DNA of volatility is only ±1%. The decline was an attractive buying opportunity I hope you took advantage of.

This past weekend marked the start of India’s five-day Diwali celebration. Also known as the Festival of Lights, Diwali is considered an auspicious time for gold buying.

Indian gold demand fell 30% year-over-year in the September quarter as high prices discouraged consumers. The good news is that 2020 was the second straight year of good monsoon rains, which is supportive of India’s rural economy, responsible for about 60% of annual gold demand, according to the World Gold Council (WGC).

Also in gold-related news, Judy Shelton moved one step closer to getting a seat on the Federal Reserve Board. The former economic advisor to Trump supports both longer-for-longer interest rates as well as a return to a gold standard. However unlikely that may be, it’s good to know someone on the Fed has gold in mind.

Shelton could be confirmed by the full Senate as early as this week.