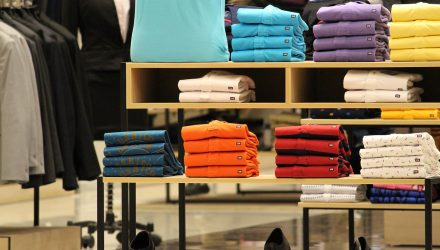 Amid all the talk about the rise of e-commerce and online shopping, the  SPDR S&P Retail ETF (NYSEArca: XRT) is up 9.51% this year and some data points augur well for the future of some brick-and-mortar retailers.

The National Retail Federation (NRF) is projecting retail sales figures to grow from 3.8 to 4.4 percent, which is lower than the 4.6 percent growth experienced in 2018–something investors should take note of with respect to retail-focused exchange-traded funds (ETFs).

The NRF numbers showed a continuing trend of growing online sales as consumers shift from brick-and-mortar stores to the internet. Online and non-store sales rose 10.4 percent higher last year and the NRF is predicting more of the same for 2019. Still, there are some catalysts for brick-and-mortar retailers.

“Leading physical retailers are increasingly proving their relevance as part of the evolving consumer shopping landscape with omni-channel business models, despite fears of a broad-based retail apocalypse and a rise in retail bankruptcies, according,” said Fitch Ratings. “We believe physical retail can retain around two-thirds of retail sales excluding auto, gas and low-penetration categories like grocery and influence much of the remaining sales over the medium term, compared to about 70% in 2018 according to information from the US Census Bureau.”

What’s Next for Trade War?

Future challenges, however, will be the ongoing trade war between the U.S. and China, unless the two largest economies can come to a permanent trade deal that’s beneficial for both sides. In the meantime, more tariffs could possibly hurt sales on cotton-based clothing while the broad U.S. economy could also slow down, causing consumers to pare down spending.

“Two-thirds can be retained as brick-and-mortar retailers with the greatest scale and cash generation deploy capital toward building omni-channel models and retaining customers. These investments, along with consumers’ desire to shop across online and offline marketplaces, should support market share stability or expansion for many of Fitch’s investment-grade issuers,” according to Fitch.