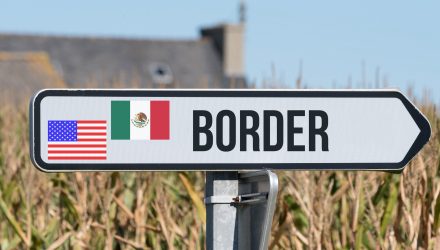 While the majority of May was focused on the U.S.-China trade war, June brings a new opponent to the tariff-for-tariff battle in Mexico, and this paves the way for Mexico-specific and Latin America-focused exchange-traded funds (ETFs) in play.

U.S. President Donald Trump turned his attention to Mexico in the latest tariff wars by announcing a 5 percent tariff on all Mexican imports, which will begin on June 10. The move came as Trump urged Mexico to “reduce or eliminate the number of illegal aliens” entering the U.S.

Now, this topic comes back to the forefront.

Mexico and Other ETFs in Play

ETF investors who see a possible trade brewing in the newest U.S.-Mexico trade saga can look to ETFs like the iShares MSCI Mexico Capped ETF (NYSEArca: EWW) or for more juice, the Direxion Daily MSCI Mexico Bull 3X ShsETF (NYSEArca: MEXX). Following the announcement of the latest tariffs, EWW fell 3.64 percent while the triple leverage of MEXX meant losses were over 12 percent.

“So far Mexico isn’t exactly rolling over to Trump’s demands. President Andrés Manuel López Obrador posted an open letter to Trump yesterday (last Thursday), which the New York Timesp ortrayed as conciliatory because it sought to avoid ‘confrontation’ and called for ‘dialogue,'” wrote Donald Luskin of Trend Macro Investment Strategy in their latest report. “The Times left out the letter’s zingers such as: ‘America First’ is a fallacy.”

However, investors who can sense an opportunity in the pullback can try their hands at those ETFs. EWW is up roughly 8 percent for the year.