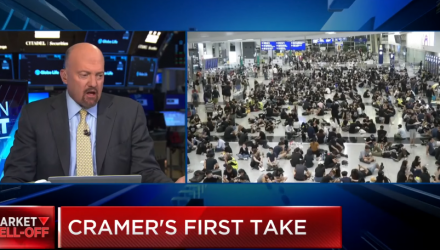 Market maven and CNBC’s “Mad Money” host Jim Cramer said that an even greater tail risk to the markets is the Hong Kong protests. The ramifications of the situation could hit the markets harder than the U.S.-China trade war.

Due to Hong Kong being a major financial hub in Asia, a potential shutdown could put global markets in a tailspin.

“This is more serious than the trade talks,” he added. “If you want to know what could tip you into a worldwide recession, it is just a shutdown of Hong Kong.”

While the markets are fixated on the U.S.-China trade deal, there is another potential economic risk looming that might not be getting the attention it deserves. That is the rising Hong Kong protests, which could upset any chance of a trade deal even happening.

“I think the potential black swan, if there is a black swan right now, is what’s happening in Hong Kong right now,” said famed investor Steve Eisman, who was the subject of the book and film “The Big Short.” “If things escalate even further in Hong Kong, that would have a real impact back on the global economy.”

“That’s actually what I’m worried about the most right now, because every weekend we’ve got this drama where the people of Hong Kong are having protests in the millions and its starting to get very violent,” Eisman added.

The protests, which have been festering since the start of the summer, poses a potential market risk that could translate to a black swan event. In financial sector vernacular, a black swan is a major disruption that could obliterate the markets and economy.

However, investors should proceed with caution as the violence escalates. However, an investor with a cast-iron stomach may find value in these ETFs.