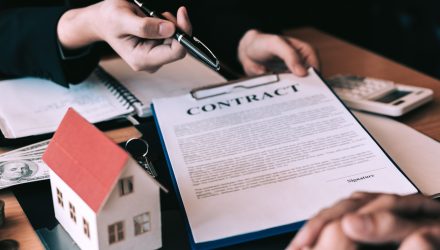 Is It Time to Start Investing in Real Estate ETFs ‘REIT’ Now?

The stock market is humming along with the Dow Jones Industrial Average and the S&P 500 reaching new highs, but in the rearview mirror is still a real estate market that has been weighed down by high prices despite lower rates. However, the time could be right to start investing in real estate via ETFs or funds that focus on real estate investment trusts (REITs).

With the possibility of an extended bull run that’s on its last legs, real estate could be on the sectors in the forefront during a recessionary period—it’s a notion that’s hard to believe given that the financial crisis in 2008 saw the sector suffer.

“2008 and 2009 were very rough years for REITs,” wrote Jussi Askola on Seeking Alpha. “The housing market crashed, banks stopped working, and suddenly, refinancing debt became much more difficult or even impossible. REITs were forced to cut dividends not necessarily because of operational issues, but because they needed liquidity to deal with maturating debt and other uncertainty. Dividend cuts, combined with a housing crash and troubled banks, led to massive volatility across the REIT sector and a lot of investors panicked and sold off at large losses.”

With thoughts of the 2008 financial crisis still fresh in some people’s minds, it’s justified they’d avoid REITs like the plague. In the broad scheme of history, however, REITs have been better performers than recent past.

“A lot of investors avoid REITs today simply because they still have nightmares of the 2008-2009 carnage and fear a remake of it sometime in the near future,” wrote Askola. “Recognizing that each recession is different, we believe that it is more rationale to look at the performance of different asset classes over many cycles to assess their resilience to recessions.”

“The conclusion is that REITs (VNQ) are exceptionally resilient to recessions,” Askola added. “At the exception of the great financial crisis, they have provided meaningful downside protection in recessions and outperformed the S&P500 (SPY) by more than 7% per year in late cycle periods since 1991.” 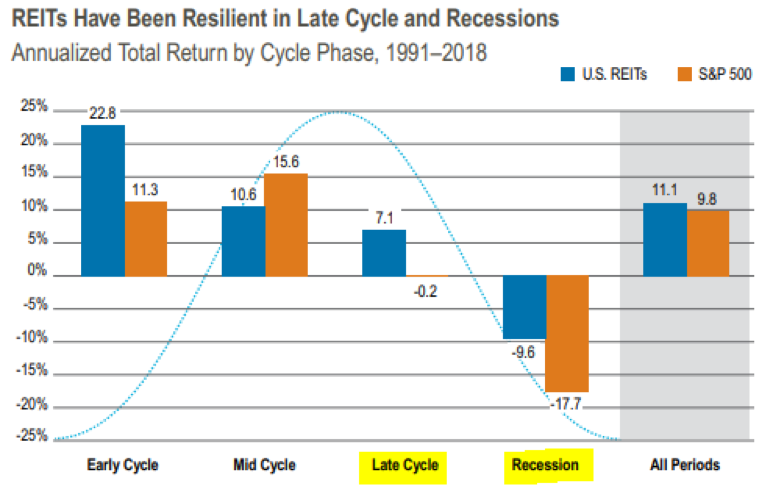 Investors can opt for funds like the Vanguard Real Estate ETF (NYSEArca: VNQ). The fund seeks to provide a high level of income and moderate long-term capital appreciation by tracking the performance of the MSCI US Investable Market Real Estate 25/50 Index that measures the performance of publicly traded equity REITs and other real estate-related investments.