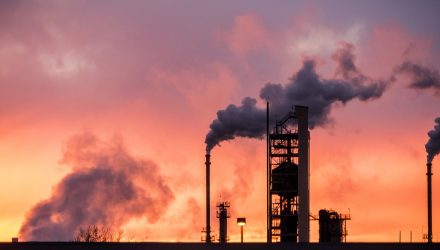 Though XLE is still up 8.63% year-to-date, the fund is lower by 2.41% over the past week. Data indicate those declines unnerved some investors.

Departures from XLE came ahead of a massive earnings week for the energy sector. This week, over 55% of the components in XLE’s underlying index report fourth-quarter earnings. That includes the benchmark’s two largest names – Dow components Exxon Mobil Corp. (NYSE: XOM) and Chevron Corp. (NYSE: CVX) – later this week.

“Oil fell below $52 a barrel on Monday after advancing nearly 27% from its Dec. 24 low as OPEC cut production. But news that the U.S. is pumping more has helped reignite supply concerns based on record American output, climbing stockpiles, and uncertainty about whether trade tensions between the U.S. and China will be resolved,” according to Bloomberg.