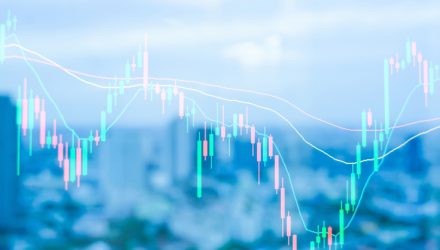 The SPDR Mid-Cap 400 (NYSEArca: MDY) and rival mid-cap exchange traded funds often generate better returns and than rival large- and small-cap ETFs and a lot of that has to do with the sector mix of the benchmark mid-cap index.

Currently, MDY, one of the largest mid-cap ETFs, allocates nearly half its combined weight to the financial services, industrial and technology sectors.

“While sector allocations contributed to the S&P MidCap 400’s excess returns in 2000, the performance of mid-cap I.T. stocks also helped: the mid-cap benchmark’s Information Technology sector fell 4.7% in 2000 compared to a 40.9% plunge by the corresponding S&P 500 sector,” said S&P Dow Jones Indices in a recent note. “So which effect was more important in explaining the mid-cap index’s outperformance – its sectoral allocations or the selection of stocks within each sector?”

The $19.74 billion MDY devotes about 34% of its combined weight to the consumer discretionary, real estate and healthcare sectors.

“The relative importance of stock selection suggests that mid-cap companies may possess a strategic advantage relative to firms within different size ranges,” according to S&P Dow Jones. “Indeed, mid-caps have generally overcome the risks of small-cap companies while remaining nimble enough to take advantage of growth opportunities that may be unavailable to their large-cap counterparts.  As a result, market participants may wish to consider the potential applications of an index-based allocation to U.S. mid-cap equities.”