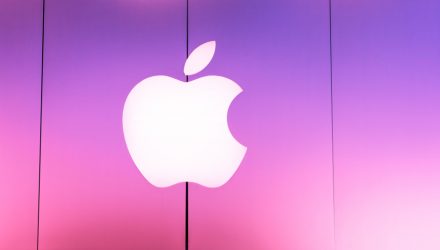 How Big a Slice is Apple in Your ETF? 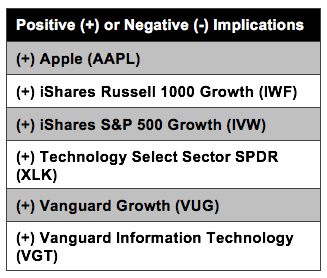 Despite a strong run thus far in 2020, Apple remains attractive to CFRA. Following AAPL’s product releases, CFRA Equity Analyst Angelo Zino reiterated his Buy recommendation on AAPL. He noted that AAPL unveiled two new Apple Watch and iPad models each. The Apple Watch SE comes at a more affordable price point of $279 while AAPL keeps its Series 3 but at a low $199 price, which Zino forecasts will further help adoption for the device. AAPL also plans to remove the USB power adapter from the Apple Watch, which will help cut costs. The 8th generation iPad is largely the same as its predecessor but with a more powerful processor while the iPad Air has many new features (e.g. more colors, enhanced/more speakers, and improved cameras).

Most importantly, in Zino’s view, were the announcements of app-based Apple Fitness+ ($9.99 per month or $79.99 per year, family included, available at year-end and 3 months free with Apple Watch purchase) and its Apple One Subscription Plan (priced from $14.95 to $29.95 monthly), which offers bundling options for a host of its services. AAPL’s new service offerings will provide greater recurring revenue opportunities, says Zino, and could support upside potential to CFRA’s estimates for AAPL’s Services business in FY 21 (Sep.). He still anticipates AAPL unveiling its much anticipated 5G devices next month.

Attractive ETF holdings are an important driver of future results. While many investors rely solely on past performance and/or fees in choosing an ETF, CFRA encourages investors to dig deeper. Our forward-looking star ratings include a review of the risk/reward traits of each ETF holding. Such analysis is important when stocks like AAPL are significant stakes in the fund.

The tech giant is a key driver for many sector ETFs. While no two Information Technology ETFs mentioned in this report track the same index, a 20%-plus stake in APPL is the norm — not the exception. XLK and VGT, the two largest pure technology ETFs, had 24% and 21% of their assets in Apple, equal to $8.3 billion and $7.5 billion as of September 14, according to CFRA’s First Bridge ETF data. VGT, the slightly larger fund of the pair, holds more small- and mid-cap stocks than XLK, which provides slight diversification. Investors in more moderately sized Fidelity MSCI Information Technology Index ETF (FTEC) and iShares U.S. Technology (IYW) also have more than 20% of the fund invested in Apple.

Growth ETFs invest in more than Information Technology companies but are also dependent on Apple. The days when APPL was viewed as value stock by index providers are in the past and the company is the heftiest weighting in most growth ETFs. For example, iShares Russell 1000 Growth ETF (IWF), iShares S&P 500 Growth ETF (IVW), and Vanguard Growth ETF (VUG) hold between 10% and 12% of assets in Apple.

Meanwhile, recently launched and still small Direxion High Growth ETF (HIPR) has a 17% stake. While investors also obtain sizable exposure to Amazon.com (AMZN) and Facebook (FB) found in the Consumer Discretionary and Communications Services sectors, they should understand how important Apple to their growth ETF’s performance.

Meanwhile, iShares Core Dividend Growth ETF (DGRO) also has AAPL as its largest holding, but just a 3.8% weighting. The fund holds companies with a history of sustained dividend growth and includes many value stocks such as Chevron (CVX) and JP Morgan Chase (JPM).

In total, 278 ETFs own a stake in AAPL, including broadly diversified SPDR S&P 500 (SPY), the largest ETF, which recently had a 6.7% position.

CFRA continues to find Apple shares attractively valued and thinks the company’s growth prospects remain strong. While investors seek out ETFs in part for stock-specific diversification benefits, we view a hefty weighting in Apple as a favorable contributor to future returns.