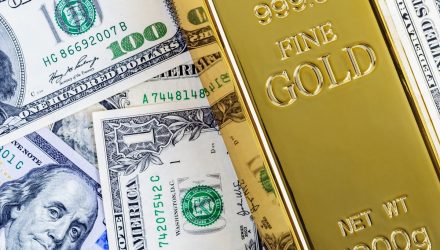 That theme is continuing this year as GDX, the largest gold miners ETF, is higher by 7% while GOAU is up nearly 11%.

Investors have seen government policy on both the monetary and fiscal side, such as interest rates, money supply, tax, regulations and spending, affect the outlook for gold prices. An overarching theme in recent months has been the trade wars as the U.S. and China make up 40% of global GDP. Meanwhile, with the economy slowing and the Federal Reserve easing up on interest rate hikes, more investors are warming up to gold for a safety play to hedge any further risks down the road.

Industry consolidation could also serve as a catalyst to drive gold miners higher.

“Barrick Gold Corp.’s $5.4 billion purchase of Randgold Resources Ltd. set off a chain reaction that led to Newmont Mining Corp.’s $10 billion deal for Canada’s Goldcorp Inc. last month,” reports Bloomberg. “The flurry of activity – which coincided with a late-2018 surge in bullion prices – has re-ignited interest in gold, throwing the whole industry into a thrall of speculation over who might be next.”

What’s Next for Gold

Newmont’s deal for Goldcorp has touched off rampant speculation about which gold miners, including some names residing in GDX and GOAU, could be next to be acquired.