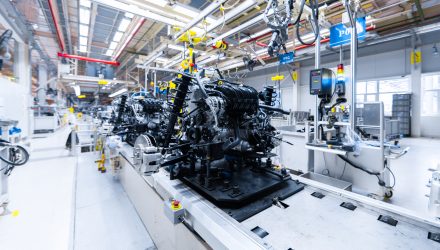 ISM Manufacturing data released on Monday showed that manufacturing activity lagged in the month of November following a decline in inventories and new orders. The ISM Manufacturing Index came in at 48.1 compared to forecasts of 49.4—October’s reading was 48.3.

“Market started the day on a risk-on tone, but got caught off guard when the ISM data was a bit weaker-than-expected. We saw equities, yields and the dollar all correct, which has helped gold a bit,” said Ryan McKay, a commodity strategist at TD Securities.

The Federal Reserve has been keen on relying on economic data to decide the direction of its interest rate policy. More cuts could help the case for higher gold prices, but in its last meeting, the central bank said it doesn’t foresee further rate cuts coming.

“The notion is that the U.S. Federal Reserve is done cutting (interest rates) for now and we’ll need to see a trend in weaker data through early 2020 to convince the market that we’re going to get more cuts. Until then, there’s no real impetus to see gold rally,” McKay added.

In the meantime, another precious metal continues to soar to new highs—palladium—it moved as high as over $1,860 per ounce. ETF investors who want to get in on the palladium action can look to the Aberdeen Standard Phys Palladium Shares ETF (NYSEArca: PALL).

PALL seeks to reflect the performance of the price of physical palladium, less the expenses of the Trust’s operations. The fund is designed for investors who want a cost-effective and convenient way to invest in palladium with minimal credit risk.

“Palladium positioning is slightly counter-intuitive to the price action, implicitly confirming heavy OTC interest from the long side,” INTL FCStone analyst Rhona O’Connell said in a note. “After weak longs were shaken out in early November another push to the upside is now approaching resistance from the uptrend.”