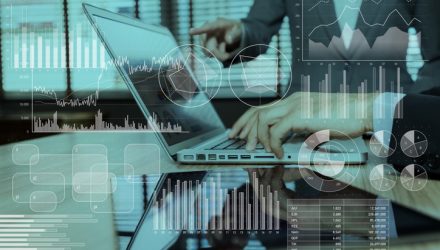 Investors seeking out exposure to a sector but wanting the benefits of diversification have an array of fund choices. They can choose among low-cost market-cap weighted index strategies, actively managed ones, or attempt to split the difference with an alternatively weighted and periodically rebalanced index choices. But understanding what is and is not inside the portfolio should play a key role in their decision.

Financial Select Sector SPDR (XLF) is a $24 billion market-cap weighted index ETF that has provided exposure to the S&P 500 constituents since 1998. Though there are now 69 stocks in the portfolio, the top-10 holdings recently represented 55% of assets. Berkshire Hathaway (BRK.B) was the largest but was closely followed by JPMorgan Chase (JPM) and then Bank of America (BAC 28 ***). Investors in XLF pay a modest 0.13% expense ratio.

At the other end of the ETF spectrum is Davis Select Financial ETF (DFNL), which launched in January 2017 and has approximately $150 million in assets. DFNL is actively managed by Chris Davis and Pierce Crosbie with a focus on companies that have competitive advantages, disciplined capital allocation and that offer above-average long-term growth prospects. Yet management seeks those that trade a below-average multiples. The fund holds 27 stocks and has 58% of assets in its top-10 holdings.

Invesco S&P 500 Equal Weight Financials (RYF 43 Marketweight), which launched in 2006 and now has $430 million in assets, holds the exact same stocks as XLF. Yet the index behind it rebalances on a quarterly basis to hold a similar 1.4% weighting in each security.

Investors receive some of the benefits of active management, as RYF sells winners and adds to lagging positions. In early June, American International Group (AIG 53 ****) and Cincinnati Financial (CINF 103 ***) were the largest positions with weightings between 1.7% and 1.8%. Meanwhile, BK and WFC had shrunk to 1.2% and 1.3%, respectively. The smart-beta ETF charges a 0.40% expense ratio, in between XLF and DFNL. RYF also trades 30,000 shares a day, more than the 10,000 a day for DFNL, but well below the 45 million for XLF. All three ETFs hold liquid stocks to support new share creation. Invesco DWA Financial Momentum (PFI 37 Underweight) and John Hancock Multifactor Financials (JHMF 38 Marketweight) are two small, but alternatively weighted choices. PFI uses relative strength techniques and largest recent holding at 6% of assets was MarketAxess Holdings (MKTX 340 NR). JHMF holds stocks that fit a Dimensional Funds index’s size, profitability and value criteria, including 4% positions in JPM and information technology sector constituent Visa (V 170 ****).