You are at:Home»Equity ETF Channel»Fed: “Significant Move Up in Inflation” Necessary Before Rates Rise

Fed: “Significant Move Up in Inflation” Necessary Before Rates Rise

The Federal Reserve instituted its third straight interest rate cut in 2019 and investors won’t see any further rate increases soon until Fed Chairman Jerome Powell sees a “significant move up in inflation.” The capital markets cheered the move following the decision with a 100-point rise in the Dow Jones Industrial Average at the close of Wednesday’s trading session.

“We just touched 2% core inflation to pick one measure. Just touched it for a few months and then we’ve fallen back,” Powell said following the central bank’s decision to cute rates to a range between 1.5% to 1.75%. “So I think we would need to see a really significant move up in inflation that’s persistent before we would consider raising rates to address inflation concerns.”

The data-dependent Fed will continue to monitor any economic flows of information as it comes in to determine the course of future interest rate adjustments.

“We see the current stance of monetary policy as likely to remain appropriate as long as incoming information about the state of the economy remains broadly consistent with our outlook,” Powell told reporters at his post-meeting news conference.

Overall, the Fed’s view on the economy is strong with economic activity rising at a moderate rate.

“Overall, we continue to see sustained expansion of economic activity, a strong labor market and inflation near our 2% objective as most likely,” Powell said. “Our views about the path of interest rates that will best achieve these outcomes have changed significantly over the past year.” 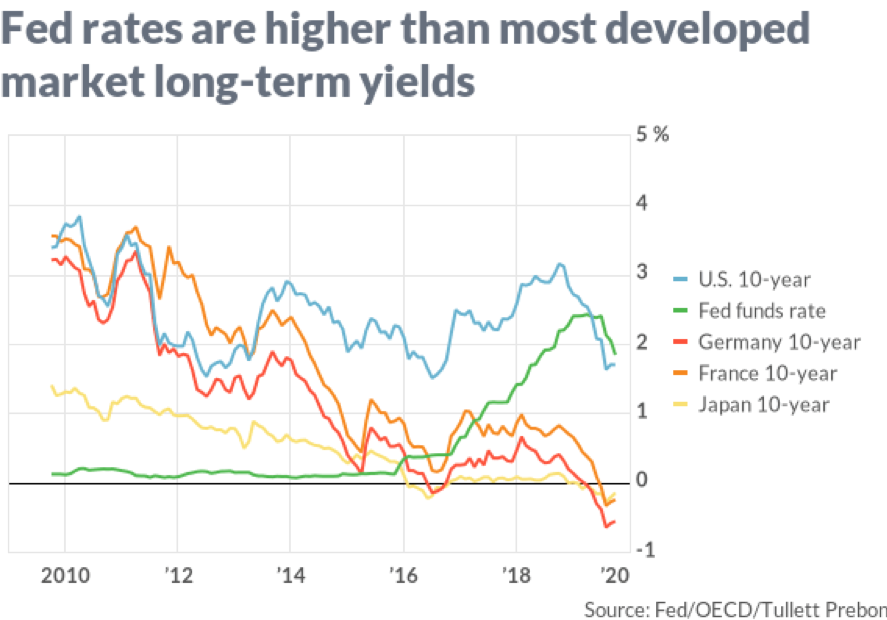 Despite the latest rate cut, the U.S. relative to other nations is still comparatively high. When looking at the benchmark 10-year Treasury note yield, it’s still higher versus other countries, including German, France and Japan.

An inverted yield curve with the 2-year and 10-year note have been keeping the markets in cautionary mode as recession fears are in the back of investors’ minds. Some analysts feel even more rate cuts will be necessary to stymie a recession.

“The Fed needs to cut to un-invert the yield curve as the slope from fed funds to 10 years is still negative,” said Joseph LaVorgna, chief economist for the Americas at French bank Natixis.