You are at:Home»Equity ETF Channel»Dow ETF Could Face Near-Term Pressure 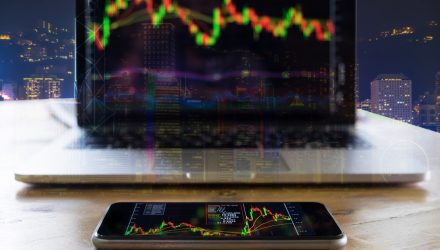 Caterpillar Chief Financial Officer Andrew Bonfield pointed out that China made up between 5% and 10% of the company’s total sales and 10% to 15% of its construction unit’s revenue. The company calculated that the impact from tariffs on steel and other materials was about $40 million in the third quarter and over $100 million for the full year.

“The rapid-fire rebound in stocks from the worst of their late-December lows slowed a bit last week, just as the small-cap Russell 2000 Index (RUT) closed in on a double-digit percentage return for 2019,” according to Schaeffer’s Investment Research. “But the Dow Jones Industrial Average (DJI) outperformed its equity benchmark peers for the period, ending Friday up 0.1% from the prior week’s close, while the S&P 500 Index (SPX) fell 0.2%, the RUT advanced 0.02%, and the Nasdaq Composite (IXIC) edged up less than 0.01% on the holiday-shortened week.”

DIA currently resides 1.56% below its 200-day moving average. It has been over a month since the fund closed above that line.