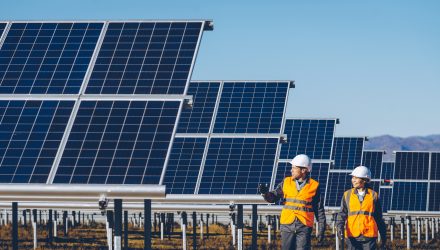 The Invesco Solar ETF (NYSEARCA: TAN), the largest exchange traded fund dedicated to solar equities, is soaring this year, up nearly 26%, but slowing solar installations are a factor to consider before embracing solar investments.

“Much was made at the time about solar installations breaking record numbers and asserting itself as a much more integral part of energy consumption. But following a high-water mark reached in 2016, the pace of solar installations has fallen off. The same holds true for residential installations,” notes Fitch Ratings.

Until solar is more widely embraced by politicians at the national level, “investors need to understand that this fund is meaningfully more volatile than its peers and likely the majority of investments you may own,” according to Seeking Alpha. “Even though the fund is down nearly 30% year to date, it may continue to drop in the future as the impacts of a broader recession take hold.”

Some states are moving toward increased solar installations. For instance, California will require all new homes built there to have solar panels starting in 2020. However, those government efforts are no guarantees of success for solar users or the sector’s investments.

“However, numerous instances of unrealized promises and hardships driven by inaccurate forecasts, asymmetric information or less than ethical sales practices from middlemen are putting the brakes on this rapidly growing sector. Long Island provides an example where a good idea to save energy costs could become problematic without enough guardrails in place to protect it,” according to Fitch.