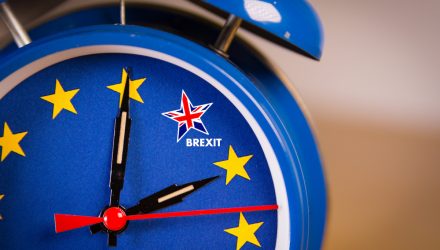 The SPDR STOXX Europe 50 ETF (NYSEArca: FEU), an ETF offering a broad-based approach to European equities, is higher by more than 9% this year. That could potentially be a sign that some market participants are pricing an easing of Brexit-related tensions and volatility.

“Much of March will be dominated by Brexit headlines and nail-biting regarding potential 11th hour deals,” said State Street in a note out Wednesday. “Rumors, fresh threats of UK leadership coups and more political grandstanding will likely move global markets throughout the month as the deadline approaches.”

Brexit implications are relevant to FEU because the ETF devotes 30.63% of its weight to U.K., by far the fund’s largest geographic weight.

“Sadly, I’m afraid that whichever Brexit outcome we do get, it just won’t matter much either, especially to the UK,” said State Street. “It’s too late; the damage has already been done. UK citizens sealed their country’s fate the moment they voted to withdraw from the EU, irreparably harming both the UK and EU economies.”

The U.K. is scheduled to leave the European Union on Mach 29, and some market observers fear that the country could exit the union without a deal on the terms of separation, which could cause disruptions in trade, travel and financial markets. Stocks and the currency would obviously suffer.