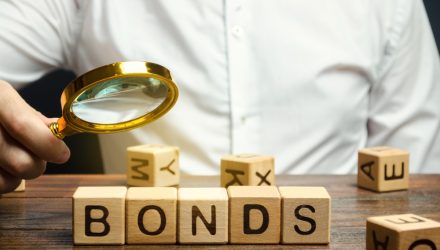 Bond ETF volumes picked up in late February as yields climbed higher yet trading occurred per usual. On February 25, the yield on the 10-year Treasury rose16 basis points to 1.54%, a level not seen in a year before the widespread awareness of Covid-19 and the subsequent slowdown in the U.S. economy. In the interim, yields fell as low as 0.52% in early August on a closing basis but have been creeping higher as favorable indications about a vaccine spurred optimism. During February, yields rose more than 35 basis points alone and closed at 1.46%. Nonetheless, investors still added $13 billion to U.S.-listed bond ETFs in the past month, according to CFRA’s First Bridge ETF database, pushing the asset base to $1.1 trillion. While the category’s net inflows in the past month were modest compared to the $79 billion for equity ETFs, representing a lower-than-normal 14% share, investors have continued to gain comfort in the liquidity and price transparency received relative to owning bonds directly or through a mutual fund.

Among the 100 largest ETFs, TLT is likely punished the most from higher yields. The Treasury ETF has an average duration of 18 years, meaning that for every 100-basis-point increase (or decrease in yields), investors should expect an 18% decrease (or increase) in the fund’s return. Year-to-date through February 26, TLT declined 9.2%. The $14 billion ETF incurred $3.1 billion of redemptions in 2021, with $1.9 billion in the past month.

While that sentiment shift is understandable, it is encouraging that on February 24, TLT traded 52 million shares, a four-fold increase compared to its 30-day average volume. Yet TLT closed at a minuscule 0.02% discount to net asset value (NAV), meaning buyers and sellers met and fairly agreed on the price with no clear winners or losers. In March 2020, TLT traded at significant discounts to NAV, as low as 5% on March 11, and premiums, as high as 1.3% on March 20. The trading in February 2021, while boring, is a great sign to CFRA.

LQD has suffered the largest net outflows in 2021. The corporate bond ETF’s $7.7 billion of outflows shrunk the ETF to $45 billion in overall assets. LQD incurs elevated credit risk relative to AAA-quality holdings inside TLT, with approximately half of LQD’s assets in bonds rated BBB. However, the 4.2% year-to-date decline and high outflows are likely due to concerns about the average duration of nine years during the recent period of rising rates. On February 24, LQD traded 35 million shares, double its 30-day average, but the ETF closed at an extremely low 0.08% discount to NAV. In March 2020, LQD closed at both a premium and a discount to NAV of 5% within a week.

BND and peer iShares Core U.S. Aggregate Bond ETF (AGG 115 ***) incurred strong inflows in 2021. The Vanguard and iShares flagship broad market ETFs pulled in $4.5 billion and $2.8 billion of net inflows, respectively, year-to-date through February. AGG and BND incur an average duration of between six and seven years, less than LQD and TLT, which we think makes the former two more supportive of usage by longer-term investors. On February 25, BND and AGG closed at 0.01% and 0.04% discounts to NAV.

While CFRA has more favorable ratings on LQD and TLT than AGG and BND, based in part on our forward-looking view of risk and reward, the price-to-NAV differential plays a part in our cost analysis for all ETFs. Investors should take comfort that despite the recent spike in bond yields that has shifted sentiment away from the more interest-rate sensitive bond ETFs, these funds have benefited from strong liquidity and efficient trading. Growing usage of bond ETFs helps all investors.