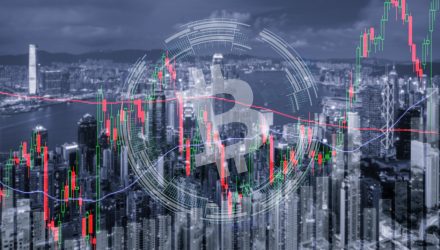 In May, it seemed that every exchange-traded fund (ETF) that catered to China got racked by the U.S.-China trade deal going sideways, which may have left a bad taste for opportunities in the world’s second largest economy. However, while equities were falling, cryptocurrencies were on the move as Bitcoin began its upward trajectory and its underlying technology, blockchain, was able to mute the effects of volatility in the markets.

Rather than getting broad-based exposure to China, ETF investors can opt for the Reality Shares Nasdaq NexGen Economy China ETF (NASDAQ: BCNA). The fund itself is up over 21 percent year-to-date, which is almost seven times more than the broad market-based iShares China Large-Cap ETF (NYSEArca: FXI).

BCNA seeks long-term growth by tracking the investment returns of the Reality Shares Nasdaq Blockchain China Index comprised of blockchain-related companies located in Hong Kong and mainland China. The index is designed to measure the returns of companies that invest in or utilize blockchain technology.

“Internet, cloud computing, large data, artificial intelligence, machine learning, block chain, bio-genetic engineering and other new technologies to drive cyberspace from everyone to the Internet to the evolution of everything, digital, network, intelligent services will be everywhere,” the document stated.

China’s biggest player in the search engine space, Baidu, is getting into the game in an effort to support the creation and development of decentralized applications. Furthermore, BCNA’s top 10 holdings consist of a who’s who in implementing blockchain technology as a major disruptive force in a variety of industry applications. 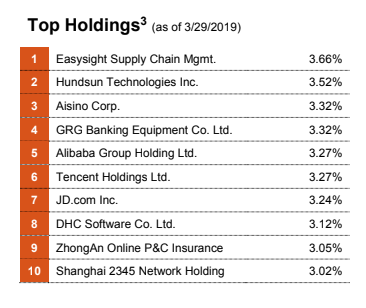 One of those holdings include Chinese E-commerce giant Alibaba who is also one of the major movers and shakers who are adopting more uses for blockchain. As financial technologies become more robust, Alibaba is adjusting with the times through its payment arm Ant Financials.

China’s central bank was already working on a national cryptocurrency last year before the government essentially pulled the plug on the idea with cryptocurrency regulations, but blockchain technology research and development has the full support of the country.

On March 28, the Peoples Bank of China (PBoC) held a 2018 National Currency Gold and Silver Work Video and Telephone Conference with cryptocurrency amongst the topics. The PBoC is planning a launch of its own digital currency called DCEP (Digital Currency for Electronic Payment), which will undergo continued development through 2019. PBoC governor Zhou Xiaochuan said the currency’s focus would be on “convenience, rapidity, and low cost in a retail payment system while taking into account security and protection of privacy.”

“China is quickly becoming a global epicenter for blockchain innovation. In 2017, the nation filed for more blockchain-related patents than any other country in the world1, and the Chinese government recently endorsed blockchain technology as an economic ‘breakthrough,’” said Eric Ervin, CEO of Reality Shares.

This is not the first foray into a blockchain ETF as Reality Shares already has the Reality Shares Nasdaq NexGen Economy ETF (NASDAQ: BLCN). The company hopes that this new financial innovation and its exposure to other markets willing to implement blockchain technology will be a success.