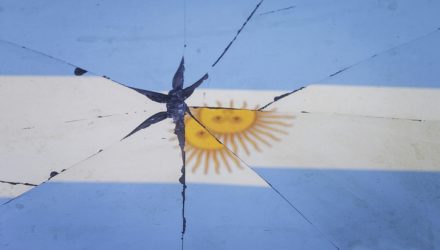 After soaring last Friday ahead of Sunday’s primary election, the Global X MSCI Argentina ETF (NYSEArca: ARGT) plunged Monday, at one point shedding a quarter of its value after pro-markets President Mauricio Macri lost a primary to Alberto Fernandez, a member of the Peronist party.

Just 90 minutes into Monday’s session, ARGT’s volume was already more than nine times the daily average. Entering the day, ARGT was one of the best-performing single-country exchange traded funds this year. Underscoring bullishness in Argentine stocks in 2019, ARGT is higher by 40% year-to-date AFTER its Monday thrashing.

“Investors had assumed Macri would lose in the primary, said Stuart Culverhouse, head of sovereign and fixed income research, and Hasnain Malik, strategy and head of equity research, at Tellimer,” reports Andrea Riquier for MarketWatch.

While Argentina’s economy, South America’s second-largest behind Brazil, has not been perfect under Macri, he has been embraced by market participants there and helped engineer a critical bailout from the International Monetary Fund in 2018.

Now market participants there have to digest the specter of a new president with ties to the controversial Cristina Fernández.

According to MarketWatch: “In short, it looks like (Macri) has paid the price for the poor state of the economy,” the Tellimer analysts said. “The challenge for Fernandez now will be to convince markets (and the IMF) that if he wins, he will maintain sound policies.”