You are at:Home»Featured»Energy Sector ETFs Rebound But Risks Linger 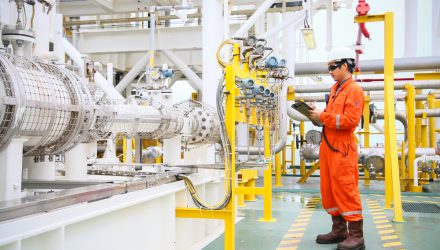 Energy sector-related exchange traded funds recovered from early steep losses Monday on growing optimism over recovering fuel demand and beliefs that the Organization of Petroleum Exporting Countries and its allies will stick to production cuts.

The Energy Select Sector SPDR Fund (NYSEArca: XLE) pared early morning losses on fears that rising coronavirus infections will slow the global economy and was flat toward the end of the session. Meanwhile, West Texas Intermediate crude oil futures were up 2% to $37.0 per barrel.

Prices rebounded from early morning losses after the energy minister of the United Arab Emirates stated that OPEC+ countries with poor compliance records have agreed to cuts and reported signs oil demand was picking up, Reuters reports.

“That seemed to take away some of the market’s negativity,” Phil Flynn, senior analyst at Price Futures Group, told Reuters. “It’s fear about the coronavirus versus the reality of what’s happening on the ground.”

Nevertheless, there are lingering concerns over demand and the overall strength of the energy market. The demand outlook has weakened after more than 25,000 new coronavirus cases were reported on Saturday in the U.S. where over 2 million have now been infected. Meanwhile, China reported a spike in cases in Beijing where lockdown measures may be reinstated.

Goldman Sachs’ top stock strategist, David Kostin, has warned that energy will remain one sector to avoid despite posting the strongest returns since the market low in late March, CNBC reports. The strategist pointed to a fundamental headwind for oil is unlikely to change, highlighting a correction in crude prices potentially as deep as 20% in the near term.

Banks have already cut credit lines to shale drillers after the collapse of oil prices and drop in output from wells, the Wall Street Journal reports. At current prices, some weaker players could fall into bankruptcy as capital for the industry dries up.

“It’s an unavoidable reckoning,” Todd Dittmann, head of energy at alternative investment manager Angelo Gordon & Co., told the WSJ. “A decade of bubbling public and private debt and equity capital delayed this day, but no more.”

Traders who are wary of further weakness in the energy segment may turn to inverse ETF options to hedge against further declines. For instance, the ProShares Short Oil & Gas (NYSEArca: DDG) tries to reflect the inverse or -100% daily performance of the Dow Jones U.S. Oil & Gas Index.