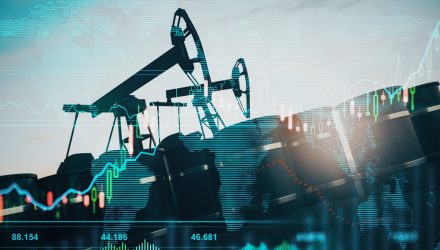 What’s Next for the US Strategic Petroleum Reserve?

While the United States’ Strategic Petroleum Reserve (SPR) has been active since 1977, policymakers had been pushing for an emergency stockpile of crude dating back to World War II. However, it wasn’t until after the 1973-74 oil embargo that action was taken to create the SPR we know today. The SPR was established by the Energy Policy and Conservation Act signed by President Ford in 1975, accepting its first delivery of Saudi Arabian light crude in 1977. Today, amid another geopolitical crisis, the SPR is still playing a role in energy markets, with President Biden announcing the largest drawdown in the reserve’s history earlier this year. This note discusses the impact of SPR releases on oil prices and its future in the context of the current US energy landscape.

SPR: One lever to pull in the fight against higher gasoline prices.

Following Russia’s invasion of Ukraine in February, US benchmark oil prices rose above $100 per barrel (bbl) for the first time since 2014, and the national average gasoline price rose above $4 per gallon, adding further pain to an economy facing high inflation. At the end of March, President Biden announced an unprecedented 1 million barrel per day (MMBpd) drawdown from the SPR over a six-month period, equating to 180 million barrels (MMBbls) in total. For context, 180 MMBbls represents approximately nine days of US oil demand or less than two days of total global oil demand. Partner countries committed to releasing another 60 MMBbls alongside the US. Last week, President Biden announced the sale of the final 15 MMBbls from the volumes committed in March. This year’s SPR releases represent over 30% of the total amount held in the reserve at the beginning of the year.

By adding more supply to the market, the SPR sales put downward pressure on the price of oil, which is the primary determinant of gasoline prices. However, it is difficult to quantify the impact of the SPR release on prices over time, given the wide range of variables that can impact global prices for oil and gasoline. When announced on March 31, US oil prices fell by 7.0%, but prices climbed from mid-April to just over $120/bbl on June 8. Oil prices then fell for four straight months (June to September), but demand concerns related to a recession and lockdowns in China were also weighing on oil over the summer. A Department of Treasury analysis in July suggested the SPR release translated to lower gasoline prices for Americans on the order of $0.13 to $0.33 per gallon.

Will the SPR be refilled?

The SPR currently holds the lowest volume of oil since 1984, when the reserve was first being filled. Stockpiles totaled 405 million barrels as of October 14, or around 57% of capacity. Last week President Biden announced his administration’s intention to replenish the SPR when crude prices are at or below $67-72/bbl but stopped short of announcing how much oil would be acquired. Replenishing the SPR with direct purchases at that price range would be the highest price paid in the reserve’s history. As an added wrinkle, legislation passed in 2015 and 2018 calls for the combined sale of over 160 MMBbls of SPR crude in fiscal years 2022 to 2027 as a way to generate revenue. With a maximum capacity of 714 MMBbls, the limit to rebuilding reserves from current levels is around 300 MMBbls, representing about 15 days of supply for the US. However, one could argue that refilling to max capacity is unnecessary given changes in the US energy landscape.

The importance of the US SPR for avoiding an oil supply shock has arguably diminished over the last several years as US (and Canadian) oil production has increased, and imports have declined. Domestic oil production has doubled since 2010 to around 12 MMBpd, while imports have shrunk from around 9 MMBpd to 6 MMBpd. More than half of US oil imports in 2021 came from Canada – a steady supplier with very little geopolitical risk. The US was a net exporter of petroleum (including crude and refined products like gasoline) in 2020 and 2021. As a net exporter, the US is not technically required to hold emergency oil reserves in 2022 to satisfy its obligations under the International Energy Program. That said, the US typically plays a major role in releases coordinated by the International Energy Agency, making it prudent to maintain significant stockpiles.

Now that the US is far less reliant on crude supplies from overseas and has become a significant oil exporter, the importance of the SPR for avoiding a supply crunch has somewhat diminished. Instead, it remains one lever the government can pull to help combat high gasoline prices. The final sale announcement last week came on the heels of the recent decision by OPEC+ to cut output starting in November (read more). US officials were clearly disappointed with the OPEC+ decision but have limited tools to offset higher oil prices beyond releases from the SPR. With OPEC+ representing about 40 MMBpd or about 40% of global production, the group clearly has more power to impact prices. In his announcement last week, President Biden said his administration would continue to evaluate whether further releases would be needed in response to international events in what he called a ‘Ready and Release’ plan.

The Strategic Petroleum Reserve has been a backstop for US oil supplies since its establishment after the 1973-74 oil embargo. Since the SPR’s formation, the US has become far less reliant on oil imports from overseas. While this year’s historic release of 180 MMBbls may have contributed to a marginal decrease in gasoline prices for Americans, it also highlighted the limited impact SPR releases could have on global energy markets.