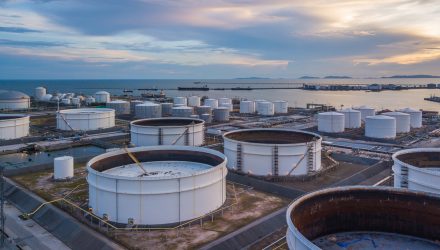 Energy infrastructure companies are involved in the transportation, processing, and storage of oil and natural gas. A large portion of the midstream space is structured as master limited partnerships, or MLPs, but C-Corporations have become more prominent in recent years.

The energy infrastructure sector usually follows a fee-based business model where companies earn a set rate for each barrel of oil or million British Thermal Units of natural gas transported, stored, or processed. Consequently, these companies are relatively unaffected by price fluctuations in the energy markets, since these companies typically do not own the oil or gas but collect based on the amount of hydrocarbons they move around.

Consequently, revenue for most business activities can be broken down to price multiplied by volume. In recent years, the growing production of North American oil, notably hydraulic fracturing or fracking, along with natural gas, has fueled more energy infrastructure like pipelines, storage tanks, and processing plants.

“In 2009, the US became the world’s largest producer of natural gas. By 2012, the US had an abundance of natural gas, leading to lower prices, but gas production continued to grow. In 2014, rapid growth in US oil production had led to a global crude oversupply and weakness in oil prices. A multi-decade ban on US crude exports was lifted by Congress in December 2015. Oil prices have gradually recovered since their relative bottoming in February 2016, and US oil production has continued to increase. In 2018, the US became the world’s largest oil producer and is now exporting millions of barrels of crude each day,” according to Alerian.

Investors interested in energy infrastructure or MLPs have either enjoyed long-term capital appreciation or dividend yield generation. According to Alerian, the historical average yield of energy infrastructure over the past five years has been nearly 6.0%, compared to the 4.0% for real estate investment trusts, 3.6% for utilities, 2.6% for bonds, and 2.1% for the S&P 500.

“Oil production growth has created a number of opportunities for midstream companies to build new pipelines connecting producing regions with demand centers, including the coast for export. Energy infrastructure companies are also building crude export terminals,” according to Alerian.