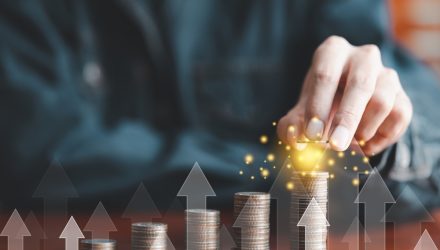 Sensitivity to rising interest rates can vary by income investments, with some vehicles more directly impacted than others. For example, interest rates are a primary determinant of bond performance, but the same is not true for MLPs. Other income categories are sensitive to rising interest rates because of their use of debt. Equity income investments face greater competition for investor dollars from new bond issuances as rates increase and bond yields become more competitive. Following another 75 basis-point hike announcement from the Fed yesterday, it is timely to look at how different income categories have performed as rates have increased this year. Specifically, this note looks at the performance of income investments from relative troughs to relative peaks in the 10-Year Treasury yield and during short yield spikes.

As shown in the chart below, there have been two long stretches this year where the yield on the 10-Year Treasury was generally climbing, from early March to mid-June and from early August through most of October. Additionally, there are three good examples of yields abruptly jumping to new relative highs, marked in mid-June, late September, and mid-October in the chart below. This chart provides helpful context for the performance discussion that follows.

Price performance for income investments varied as rates gradually increased, with MLPs outperforming and REITs seeing the largest losses in both periods in the table below. MLPs have benefitted from a strong macro backdrop for energy and tend to do well in periods of elevated inflation, not to mention positive company-level tailwinds from strong free cash flow generation. Utilities tend to be defensive and held up relatively well in the March to June timeframe but were significant underperformers in the August to October period as the yield on the 10-Year reached fresh highs above 4.0%. Utilities are sensitive to higher interest rates due to their large debt loads. Closed-end funds (CEFs) typically use leverage, and rising interest rates can result in higher borrowing costs, which could lead to lower earnings and potentially distribution cuts (read more). CEFs saw noticeable weakness in both periods. Bonds have a direct inverse relationship with rising interest rates, which is evident in their performance. REITs stand out as significant laggards in both periods. Similar to other income investments, the distributions from REITs become less compelling as interest rates increase. Additionally, REITs tend to have a higher correlation with broad equity markets, which have struggled this year, and REITs may also be more sensitive to concerns around the health of the economy.

Performance for income investments during short spikes in the 10-Year Treasury yield has been more uniformly negative this year. As shown in the table below, income investments generally underperformed the S&P 500 in periods when yields abruptly increased. REITs and Utilities were particularly weak during the periods shown. The impact of higher borrowing costs and increased competition from bonds may be factors that weigh more on REITs and Utilities compared to MLPs, which have higher yields and have been focused on debt reduction (read more).

Income investments have varying sensitivities to rising interest rates, depending on their use of debt, yield levels, and other factors. Income investments generally underperformed the broader equity market during abrupt spikes in the 10-Year Treasury yield, but performance was more mixed during the longer stretches of gradually rising rates seen in 2022.

After a strong October for energy infrastructure, current yields are below their historical averages. Energy has remained a bright spot in a tough tape.

Yields for the Dividend Dogs index suite are above their five-year averages. SDOGX has seen the best performance YTD, down only -3.38% compared to a -17.70% loss for the S&P 500, which is the starting universe for the index.

Closed-end funds have been pressured by the rising interest rate environment, and current yields for the three CEF indexes are well above their historical averages.