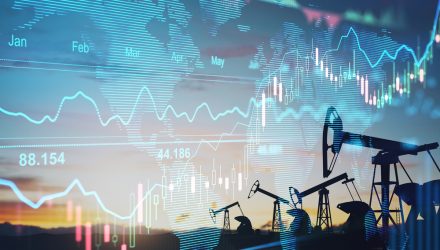 Oil prices typically dictate the direction of energy stocks, but thankfully for energy investors, that has not been the case over the last several weeks. Oil prices have seen three straight months of price declines and are down more than 30% from their relative high in June, but one may not realize that by looking at energy stock performance. MLPs have been done particularly well, noticably outpacing broader energy. Are investors finally looking past the volatility in oil prices to the actual merits of energy companies and the way they are returning cash to investors? Today’s note looks at what has driven oil prices lower and some reasons why energy stocks have been unusually resilient in light of oil’s meltdown.

What’s been weighing on oil prices?

Much of the weakness in oil prices has been driven by demand concerns related to two primary issues – recession risk and lockdowns in China. Demand typically falls in a recession, and that would ease some of the tightness in oil markets (read more). China is second only to the US in oil consumption and leads the world in oil imports. As such, demand trends in China carry significant implications for global oil markets. Beyond demand, a strong US dollar has also weighed on oil prices, and there is growing chatter about paper markets being disconnected from tight physical markets due to less liquidity and fewer market participants.

With ongoing concerns around demand, the conversation around oil supply has shifted. In June, the focus was on how much more supply could be brought onto the market to address high prices, and in September, OPEC+ announced a modest production cut, albeit largely symbolic. Going forward, a number of variables contribute to an uncertain outlook for oil supplies: the release of 1 million barrels per day for six months from the US Strategic Petroleum Reserve concludes at the end of October, an Iran nuclear deal remains stalled, and it is unclear what will happen with Russian supplies given the planned price cap and the European embargo coming into effect by year-end.

A number of factors have helped buoy energy stocks even as oil prices have weakened. For one, US natural gas prices rebounded in July and reached multi-year highs in August. Natural gas prices have retraced to ~$8 per million British thermal unit (MMBtu), but this is still much stronger than the range of $2-4/MMBtu seen for most of the last decade. Energy companies largely reported strong 2Q22 results in late July and early August. For refiners and companies with commodity exposure, more money was made in 2Q22 than in some recent full-year periods. Importantly, energy companies were able to highlight free cash flow generation and returns to shareholders. Many companies capitalized on the weakness in June and July by repurchasing equity, helping support stock prices. Energy was also relatively unscathed following the hawkish comments from Jackson Hole with less sensitivity to interest rates likely working in energy’s favor. Energy’s tendency to do well in inflationary periods may also be an ongoing support for equities.

Compared to broader energy, MLPs have held up very well. The Alerian MLP Infrastructure Index (AMZI) is only down -2.9% from June 8 to September 7 on a total-return basis compared to a -14.2% decline in the Energy Select Sector Index (IXE). MLPs’ total return is clearly benefitting from another solid quarter for distributions, which were largely announced in July. MLPs may also be enjoying some relative uplift from not being subject to the 15% alternative minimum tax included in the Inflation Reduction Act. Admittedly, the IXE had enjoyed more significant gains as oil prices increased and had more to lose as prices fell, but MLPs have also outpaced broader energy on a total-return basis since the end of March as shown in the chart above.

In recent years, oil price volatility has driven volatility in energy stocks, keeping some potential investors on the sidelines. The resilience of energy equities as oil prices have tumbled is a clear positive. For MLPs, the solid performance is particularly welcome given perceptions that MLPs trade too much in line with oil when it is falling. While a few weeks do not make a trend, it is encouraging to think that company-level improvements around free cash flow and returning capital to investors may be helping energy stocks shake off some of the volatility seen in oil prices.

AMZI is the underlying index for the Alerian MLP ETF (AMLP) and the ETRACS Alerian MLP Infrastructure Index ETN Series B (MLPB).

vettafi.com is owned by VettaFi, which also owns the index provider for AMLP and ENFR. VettaFi is not the sponsor of AMLP or ENFR, but VettaFi’s affiliate receives an index licensing fee from the ETF sponsor.