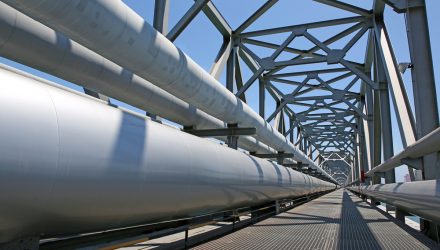 Midstream energy and energy infrastructure companies, including those residing in the Alerian Energy Infrastructure ETF (ENFR), are often associated with the processing, storage, and transportation of oil and natural gas.

There are good reasons for that association, but while oil and natural gas are the bread and butter of the midstream energy segment, the industry has the assets and infrastructure to make positive impacts elsewhere while diversifying revenue streams and creating value for shareholders.

Consider the ongoing drought scenarios in the western U.S. and the elevated needs for water infrastructure. Put simply, states such as Arizona, California, and Nevada are contending with lengthy droughts, but demand for water in those states isn’t declining. Other states could help out if there were viable options for moving water from state-to-state. Enter the pipelines currently operated by some ENFR member firms.

“Big oil could help tackle the water shortage in the western United States by repurposing existing infrastructure to help transport clean water to the areas most in need. Innovations such as this highlight how oil and gas majors, and their infrastructure and knowledge, will always be relevant even in a country continually pushing for decarbonization and renewable,” reports Felicity Bradstock for OilPrice.com.

Over the near-term, it’s not immediately clear if ENFR components are pursuing roles in water transportation, but it’s not a stretch to see some pipeline operators considering such moves in the years ahead. After all, many midstream companies are already leveraging established assets to participate in the renewable energy boom, proving that they’re committed to revenue diversification while acknowledging the importance of contributing to positive change on the climate change front.

Additionally, the potential entry of pipeline operators into the water transportation business is practical. By some estimates, the U.S. needs to commit hundreds of billions if not trillions of dollars to shoring up water infrastructure, but by using existing pipelines, that price tag could decrease. Not to mention the fact that ENFR holdings have the logistical and operational experience necessary to move water from one region to another.

“Experts responding to water scarcity in the U.S. agree that a federal approach to approving and constructing a major new water pipeline would be lengthy and expensive, likely to take decades to complete by which time the water problem will have worsened,” according to OilPrice.com. “In addition, following recent action taken against the proposed construction of the Keystone XL Pipeline, it could be canceled before it was ever finished. Ultimately, drought-prone areas such as Arizona, California, and Nevada are likely to run out of water far before a pipeline can be built if the issue is not tackled.”