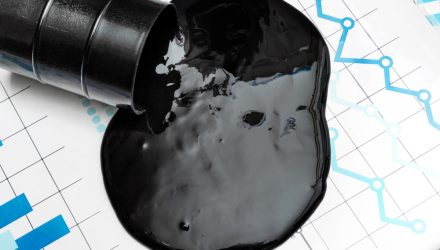 Energy exchange traded funds gained on Monday, with oil prices breaking above $80 to seven-year highs on the ongoing crude shortage.

U.S. crude oil prices were hovering around their highest levels since October 2014, on pace to outperform copper this year by the largest amount since 2002 and potentially top an index of raw materials by the biggest margin in over a decade, the Wall Street Journal reports.

While some have warned that the fallout from China’s indebted property developer Evergrande Group could magnify a slowdown caused by the COVID-19 Delta variant, crude oil’s persisting strength reflects expectations of weak supply to support the energy market.

Looking ahead, even if consumers travel and consume less fuel, analysts warned that the dearth in investment for new supply by energy companies could support prices. Amid the global focus on the negative effects of climate change and the push toward renewable energy sources, the shortfall in crude oil sources could continue.

Furthermore, some are betting that a worldwide shortage of natural gas and fuels used to power homes and businesses will spill over to the oil market, especially in the winter months when heating demand rises. Power prices in Europe are already spiking, and U.S. natural gas futures have surged to a nearly 13-year high and could surge even higher if cold temperatures fuel increased demand in the months ahead.

“There’s a lot less margin for error today when you think about energy supplies and power generation,” Stacey Morris, director of research at index provider Alerian, told the WSJ. “That’s creating some of these problems that we’re seeing.”