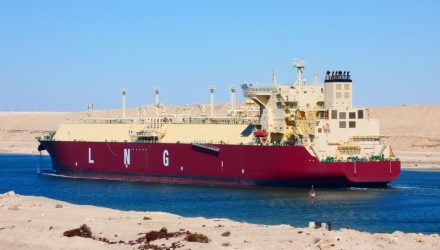 While stocks are largely down on Wednesday in anticipation of a half-point rate hike from the Fed coming this afternoon, Cheniere Energy shares have increased on its solid Q1 earnings report.

Cheniere on Wednesday reported its first quarter results, beating analyst expectations on both earnings per share and revenue.

The firm raised its 2022 profit forecast as demand and production of liquefied natural gas (LNG) skyrocketed since Russia invaded Ukraine in late February.

The invasion has led European countries to seek alternative supplies, pushing up prices and output. The U.S. has increased output in a commitment to deliver additional LNG to Europe.

“Today we are raising our 2022 financial guidance due to the sustained strength in the global LNG market and an increase in expected LNG production. The current volatility in the global energy markets signals the need for additional investment in new LNG capacity,” Jack Fusco, Cheniere’s President and CEO, says in a statement.

Cheniere raised its full-year 2022 consolidated adjusted EBITDA guidance to a range of $8.2 billion to $8.7 billion, from the previous forecast of $7 billion to $7.5 billion, due to increased volumes from maintenance optimization, the accelerated ramp-up of Train 6 of the SPL Project, and general outperformance, as well as sustained higher margins on LNG throughout 2022, and increased lifting margin, the firm says in a statement.

In line with the company’s capital allocation plan, during the three months ended March 31, 2022, Cheniere redeemed or repaid over $0.8 billion of consolidated long-term indebtedness, repurchased an aggregate of 0.24 million shares of common stock for approximately $25 million, and paid a quarterly dividend of $0.33 per share of common stock on February 28, 2022, the firm says.

The Alerian Energy Infrastructure ETF (ENFR) offers investors meaningful exposure to Cheniere, along with other energy infrastructure companies in the U.S. and Canada.