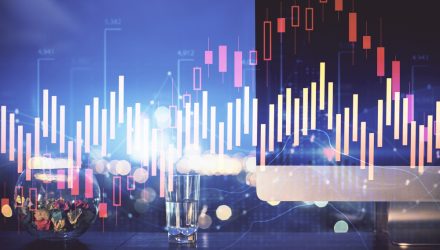 The Alerian Energy Infrastructure ETF (ENFR) and the ALPS Alerian MLP ETF (AMLP) seem similar on the surface, but the two funds have their own nuances that will benefit different investors.

While both ETFs offer exposure to energy infrastructure and serve as a way to diversify and add income to a portfolio, there are three questions an investor should consider when deciding where to allocate assets.

ENFR, which holds $70 million in investor assets and carries an expense ratio of 35 basis points, is an RIC-compliant energy infrastructure fund — meaning that it does not have to pay taxes at the fund level because it owns less than 25% MLPs.

ENFR’s top holding as of January 12 is Enbridge Inc (ENB), a multinational pipeline company with a $84 billion market capitalization, closely trailed by an MLP.

AMLP, which holds $5.5 billion in investor assets and carries an expense ratio of 90 basis points, is structured as a C-Corporation and must pay taxes at the fund level because it’s composed of 100% MLPs.

2. How Do the Taxes Vary Between Funds?

ENFR may have more upside for tax-advantaged investors because of the potential for tax-deferred income due to the nature of MLP distributions and pass-through structure.

AMLP does not have a pass-through structure, and thus, fund performance is reduced by the amount of taxes accrued as the fund withholds a portion of the returns. These funds are also able to preserve the return of capital benefit for their investors, and since they can own 100% MLPs, the proportion of income that is classified as return of capital is higher. These funds with more than 25% MLPs tend to be favored by investors seeking to maximize after-tax income, according to Alerian.

AMLP generally offers higher after-tax income because fees are taken from the NAV, preserving yield, and because the tax character of distributions mirrors that of the underlying portfolio, according to Alerian.

ENFR generally offers a lower yield due to the limit imposed on MLP ownership.