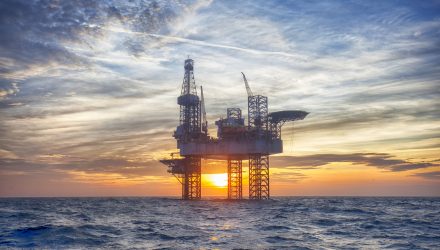 Yesterday, four energy ETFs hit record highs while over 30 such funds, including XLE, hit 52-week highs. Oil prices recently rallied after the U.S. dropped out of the Iran nuclear accord and added new sanctions against the country, which is a member of the Organization of Petroleum Exporting Countries (OPEC).

“Energy stocks are finally breaking out for several reasons, but the run-up in oil prices is supporting the sector in the near-term. Brent crude oil on Thursday broke above $80 a barrel for the first time since November 2014, fueled by geopolitical uncertainty after the Trump administration restored sanctions on major crude exporter Iran,” reports CNBC.

“First, the XLE topped January’s high of $78.39 at the same time that Brent and U.S. crude are hitting 3½-year highs. Second, the fund is breaking above the upper Bollinger Band. The so-called Bollinger Bands represent a range that indicates when prices for an asset are either looking expensive or have potentially become undervalued,” according to CNBC.

XLE is also cobbling together some notable streaks. Entering Thursday, the fund was on a 10-day winning streak, “a feat it has not accomplished since it notched a 10-day winning streak on July 2006. The fund is also on pace for its sixth straight week of gains, its longest week-to-week stretch since September,” reports CNBC.