You are at:Home»Featured»Energy ETFs Jump Ahead of Two Consecutive Gulf Coast Storms 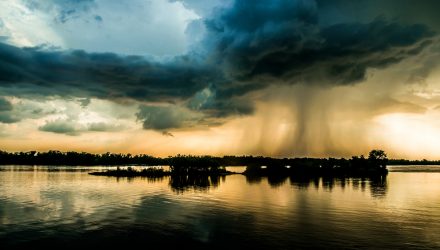 Over 15% of U.S. oil production is based on the Gulf Coast region and almost half of all U.S. refineries are situated along the coast, the Wall Street Journal reports.

Consequently, a temporary shutdown of production could weigh on supply, according to Commerzbank. Over half of oil production in the area was already closed down as of Sunday, according to the Bureau of Safety and Environmental Enforcement.

“There are some worries about a potentially volatile week ahead” for oil prices, Ole Hansen, head of commodity strategy at Saxo Bank, told the WSJ. “Apart from the Middle East, the U.S. Gulf Coast is really the most important energy hub in the world.”

Looking ahead, the National Oceanic and Atmospheric Administration predicted that Tropical Storm Marco, which is currently in the Gulf of Mexico and was downgraded from a hurricane Sunday night, will make landfall early Tuesday over Louisiana. Afterward, tropical Storm Laura, which could strengthen into a hurricane on Tuesday as it enters the Gulf of Mexico, will also make landfall in Louisiana on Thursday.

Analysts, though, anticipate the price bump from the two storms will be short-lived since oil inventories remain elevated and the demand outlook was still weak in the ongoing coronavirus pandemic environment.

“We have seen quite a serious fall in U.S. oil demand,” Tamas Varga, Analyst at brokerage PVM Oil Associates, told the WSJ. “If you have the same sort of data this week, it will not bode well for oil prices.”

This is only the beginning of the hurricane season, so investors may expect more to come.

“With these two tropical storms, hurricane season is still continuing so we are likely to have more hurricanes formed over the next three months,” Eugen Weinberg, head of commodity research at Commerzbank, told the WSJ. “At the moment, the market is not pricing this particular risk.”