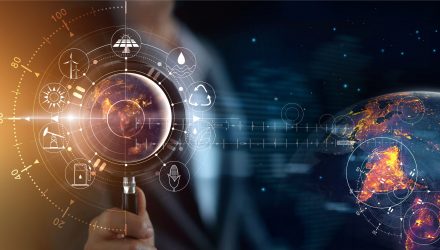 The buzzword of the year may well be “volatility” after the swift beating that stocks have taken in the early days of February. The profound absence of any tangible downside price action over the last eighteen months has left many investors over-exposed and under-prepared for a correction. That may well be the spot that energy investors have found themselves in over the last several weeks as the pernicious selling engulfs many funds in this sector.

The Energy Select Sector SPDR (XLE) had just found its footing in the second half of 2017 as surging commodity prices boosted demand for oil and gas stocks. That rally has now come under fire as XLE has dropped 16% from high to low this year and now trades 8% below its starting point for 2018. 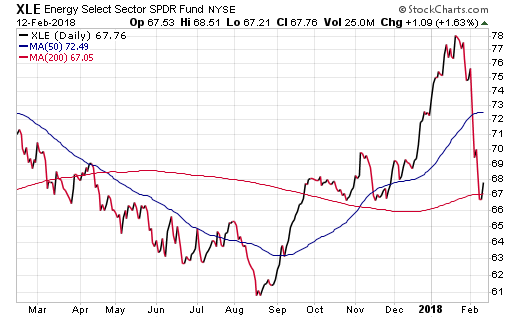 This market-cap weighted ETF tracks 32 energy companies from within the S&P 500 Index. Top holdings include well-known names such as Exxon Mobil (XOM), Chevron Corp (CVX), and ConocoPhilips (COP). XLE charges a reasonable expense ratio of 0.13% and has more than $17 billion under management.

The recent plunge in price has largely been driven by the tandem forces of a weakening global stock market in conjunction with a drop in crude oil prices. The benchmark West Texas Intermediate Crude Oil spot price has now declined over 10% since peaking in January. Energy stocks tend to be highly sensitive to the pull of energy prices, similar to the correlation that utility stocks and REITs experience with interest rates.

It’s also worth noting that, in terms of overall risk appetite, XLE has been fairly tame compared to several industry sub-groups. The SPDR S&P Oil & Gas Exploration & Production ETF (XOP) is down more than 12% this year after struggling to find much upside in 2017. XOP tracks 68 smaller stocks within the energy sector that are focused exclusively on exploration, transportation, and production operations. These stocks tend to be more volatile than their mega-cap peers. 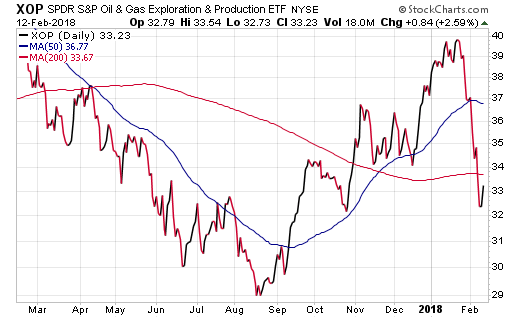