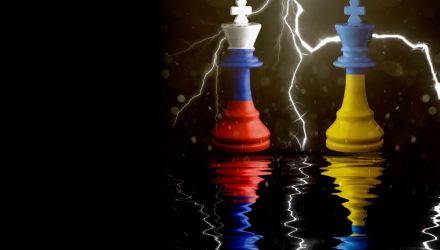 Oil-related exchange traded funds climbed Tuesday, with crude oil prices flirting with $100 per barrel, as the specter of a war between Russia and Ukraine threatened the energy outlook from Eastern Europe.

The Wall Street Journal reports that Brent crude oil futures pared earlier gains by mid-Tuesday after hitting $99.5 per barrel, their highest level since 2014.

The spike in global energy markets came as the U.S. preps sanctions against Moscow over Russian President Vladimir Putin’s latest order to advance troops into two breakaway regions of Ukraine controlled by separatists. The White House censured Putin’s act of recognizing the independence of the Donetsk and Luhansk regions.

Western governments also warned that a full-scale invasion of Ukraine could come at any time.

Keep On The Supply Outlook

The threat of sanctions has weighed on the energy supply outlook of the OPEC+ member. Germany has already moved to halt certification of the Nord Stream 2 pipeline that would funnel natural gas directly to the heart of Europe in response to Russia’s aggressive move against Ukraine. The pipeline had been waiting for approval from European regulators before it could bring nagas under the Baltic Sea.

The delays threaten to send energy prices in Europe even higher. In recent months, Russia has already been reducing its supply to Europe with Gazprom cutting flows through alternative routes, which was still within its contractual commitments but pushed prices to record highs.

As Western governments try to find a suitable response to Russia’s aggression, policymakers will have to delicately balance sanctions on Russian industries, notably profitable areas like energy, but hold off enough from triggering an energy price surge.

“I don’t think a full export ban is going to be imposed,” said Varga, an analyst at brokerage PVM Oil, told the WSJ, citing high gasoline prices and the upcoming midterm elections in the U.S. “The more important question is: How is Russia going to react? There is nothing that could prevent them from limiting supplies to Europe or anywhere else in the world.”