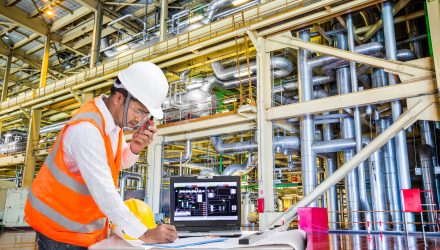 The Energy Select Sector SPDR (NYSEArca: XLE), the largest equity-based energy ETF, rose 4.5% last week and is higher by nearly 9% over the past month. While some market observers attribute the energy sector’s recent bullishness to the U.S. departing the Iran nuclear agreement, there are other factors at play.

Some market participants believe energy stocks will show more responsiveness to oil’s rally. Market observers and analysts argue that U.S. energy stocks are in a position to outperform broader equity markets this year, even if oil prices don’t move higher. The energy industry has grown more efficient after cutting costs in response to the plunge in crude oil prices in previous years, so they are now in a better position to improve revenue at lower oil prices.

Inside The Oil Surge

“Iran jitters helped push oil prices higher but a broader stabilization of crude futures near 3½-year highs can be tied to several big, prevailing trends,” according to CNBC. “Strong global oil consumption has come up against a 1½ -year-old deal led by OPEC and Russia to manage crude supply among producers.”