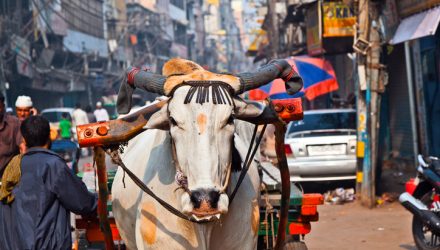 After several years of struggling, emerging markets equities and exchange traded funds perked up in 2016 and are building on those gains in 2017. The widely followed MSCI Emerging Markets Index is up 25.2% year-to-date.

Year-to-date, VWO and the iShares Core MSCI Emerging Markets ETF (NYSEArca: IEMG), the low cost alternative to EEM, are among the top ETFs in terms of new assets added.

“Tim Seymour, managing partner at Triogem Asset Management, pointed out that in the last week, the relative performance of the iShares MSCI emerging markets ETF — EEM — to the S&P 500 hit its highest level in nearly two years,” reports CNBC. “Emerging markets include China, Brazil, Russia, India and countries in southeast Asia. Helped by more stable oil prices and a weaker U.S. dollar, the benchmark EEM broke a three-year losing streak in 2016 and is up 25 percent this year, on pace for its best year since 2009.”

IEMG was the most popular ETF of the first quarter, bringing in $6.6 billion in net inflows so far this year, according to XTF data. Investors may be looking at this cheap Emerging Markets option as a way to gain access to emerging markets where valuations are much lower than the loftier prices in U.S. markets.