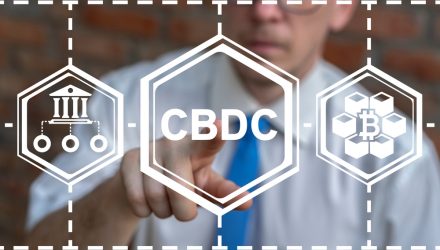 Looking at the Case for Emerging Markets CBDCs

As the landscape of digital currencies evolves, more governments and central banks are looking to enter the arena with elevated regulations and even their own currencies.

Those are known as central bank digital currencies, or CBDCs. The concept is easy to explain. While traditional cryptocurrencies, say bitcoin, ether, or dogecoin are rooted in technology, started by private individuals or companies, and, in many cases, decentralized, a CDBC is essentially a digital version of the issuing country’s money. For example, if the Bank of England issued a CBDC, it’d be a digital equivalent of the pound.

Currently, dozens of global central banks are considering CBDCs, and some experts believe that the concept could be particularly appealing in some emerging markets. If that proves true, a wave of new CBDCs in developing economies could have implications for exchange traded funds such as the Next Frontier Internet & Ecommerce ETF (FMQQ).

“More advanced economies face a specific challenge: waning demand for cash. The share of banknotes in point-of-sale transactions has dwindled to 11% in North America, 19% in the Asia-Pacific and 27% in Europe,” reports Andy Mukherjee for Bloomberg.

Specific to FMQQ, South Korea, Brazil, and India — more than two-thirds of the fund’s geographic exposure — probably don’t need CBDCs owing to robust payments systems and burgeoning fintech markets. However, some of the ETF’s smaller country exposures could be fertile territory for CBDCs.

Those include Uruguay, Kazakhstan, Egypt, and perhaps Argentina, which accounts for 10.69% of the fund’s roster.

“Cash continues to dominate the payment scene in Latin America, the Middle East and Africa, according to the FIS Worldpay Global Payments Report 2021,” notes Bloomberg.

Regarding some FMQQ holdings, increasing embrace of CBDCs in developing economies could be a boon for fintech developers and ease the friction that’s so frequently encountered in cross-border payments. To the point about fintech, that industry is blossoming in many emerging markets, and, in some cases, CBDCs could speed that ascent.

For now, CBDC use in developing economies will occur on a case-by-case basis because the reality is that some countries don’t need a CBDC while others can benefit from it.

“If the private sector in their country can’t or won’t provide high-quality, interoperable payments solutions at a reasonable price to everyone, then central banks need to step in early — to both hold on to currency sovereignty and expand financial inclusion. Otherwise, they can afford to wait,” concludes Bloomberg.