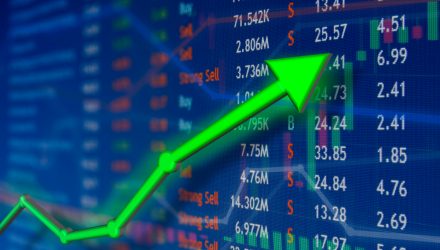 The prevailing wisdom is that in 2022, global economic growth will slow following a torrid pace set in 2021 — one aided by a spate of central bank stimulus to help economies rebound from the coronavirus pandemic.

While growth is expected to normalize in the U.S. and other developed economies, it’s likely to remain robust in select developing economies, potentially putting the Emerging Markets Internet Ecommerce ETF (EMQQ) in the spotlight.

EMQQ is a China-heavy exchange traded fund, allocating almost 62% of its weight to the world’s second-largest economy, as of the end of June 2021. GDP growth there is expected to moderate to 5.6% this year from 8% last year, according to the International Monetary Fund (IMF). However, some of the other countries represented in EMQQ won’t see such dramatic declines in GDP growth.

For example, India — Asia’s third-largest economy — is expected to post GDP growth of 8.5% this year. That’s good for the sixth spot among 190 countries, notes the IMF. India, which is home to a budding unicorn and consumer internet initial public offering (IPO) market, is EMQQ’s third-largest country exposure at 5.1%.

China and India are both among the IMF’s top 50 countries in terms of expected 2022 GDP growth, indicating that EMQQ is a credible rebound candidate this year.

Argentina, one of South America’s biggest economies, is expected to notch decent, though not spectacular, economic growth this year. The same goes for Brazil, Latin America’s largest economy. Those two countries combine for almost 8% of EMQQ’s weight with about half of that tally assigned to e-commerce giant MercadoLibre (NASDAQ:MELI).

Overall, the IMF is forecasting global growth of 4.9% this year, but only two of six groups are poised to top that percentage. Those are emerging markets and the ASEAN-5, both of which EMQQ offers exposure to.

EMQQ steadies some of the volatility that comes along with growth expectations in some developing economies by featuring exposure to mature, higher-quality markets, including South Korea, Singapore, and Taiwan, among others.

Of course, China will loom large with EMQQ fortunes this year. If regulatory headwinds there abate and GDP growth surprises to the upside, potentially indicating that Chinese consumers are feeling optimistic, EMQQ could be primed to bounce back from a trying 2021.