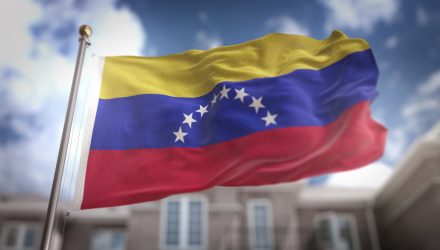 Investing in Venezuela’s sovereign debt is a dicey proposition these days. Sure, the member of the Organization of Petroleum Exporting Countries (OPEC) won a restructuring deal with Russia, but some ratings agencies have already hammered the South American nation with severe downgrades.

Funds such as the iShares J.P. Morgan USD Emerging Markets Bond ETF (NASDAQ: EMB) are passively managed and in most instances, the indexes these products are lightly allocated to Venezuelan debt.

“At present, there is no meaningful amount of local-currency Venezuelan debt outstanding thanks to the country’s hyperinflation,” said Morningstar. “Hyperinflation has all but wiped out the value of the country’s local-currency debt as the government has kept printing more money to meet its obligations. As a result, the country’s bolivar-denominated domestic debt is essentially worthless, which explains why only hard-currency Venezuelan debts are owned by virtually all emerging-markets bond funds.”