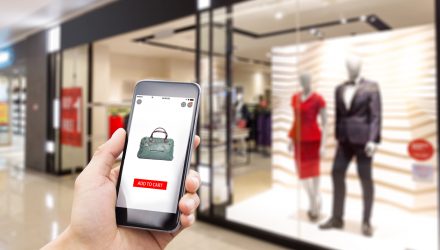 Carter also highlighted the growing reliance on smartphones as a potential game changer in consumption patterns. Specifically, he pointed toward the rising trend of e-commerce and online shopping through smart devices in an increasingly digital age. The rise of e-commerce has also paralleled the increased adoption of smartphone usage or the declining costs of smartphone devices.

Carter argued that due to the still early adoption of these smart devices and early internet penetration among developing economies, there is still a lot of room to grow as more consumers gain access to online retailers. For example, while 70% of U.S. citizens have access to smartphones, Chinese smartphone users make up about 55% of its overall population and India’s smartphone users only make up 22% of its population. Furthermore, while 89% of the U.S. population has access to the internet, only 25% of India and 55% of China have access to the internet.

As investors look for ways to capture growth in the emerging markets, some may look to a targeted consumer-sector EM play, such as the Emerging Markets Internet & Ecommerce ETF (NYSEArca: EMQQ), which includes access to EM companies related to online retailers or the quickly expanding e-commerce industry. To be included within the ETF’s underlying index, companies must derive the majority of their profits from E-commerce or Internet activities and further includes search engines, online retail, social networking, online video, e-payments, online gaming and online travel.

Financial advisors who are interested in learning more about the emerging markets can watch the webcast here on demand.