You are at:Home»Expert Insights»Electrify the Economy with Clean Renewables – Investing at the Dawn of A New Industrial Revolution 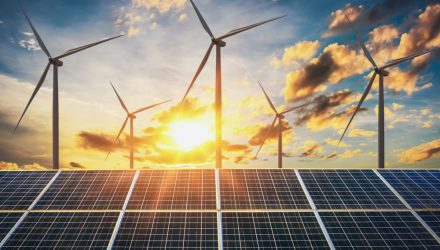 In the upcoming series of Investment Insights, Linda Zhang, CEO of Purview Investments, PM of low-carbon ETF (ticker ECOZ), will explore several key trends in the global industry transitions toward a carbon-neutral economy.  The scale and acceleration of these green transitions represent long-lasting investment opportunities while leaving a positive mark on the journey toward a clean environment and equitable society.

Purview Investments is an SEC-registered firm that specializes in climate resilience and ESG investments.  Purview is the subadvisor for TrueShares ESG Active Opportunities ETF, ticker ECOZ, an actively managed US Equity product that focuses on radically reducing portfolio carbon footprints. Linda Zhang is a co-founder and board member of non-profit organization Women in ETFs and the committee co-head of Speakers’ Bureau.

Imagine your life in 2035, when the U.S. power grid is entirely carbon emission-free.  You wake up in the morning, pick up your smartphone just fully charged with clean electricity.  You turn on your coffee machine, drop a slice of bread in the toaster, powered by the clean smart grid or the solar on your roof. You then step into your Tesla or Nio, or perhaps an EV by GM, fully charged with clean power the night before, taking you to your destination… This is not science fiction. It would be the reality under Biden’s $2 trillion climate plan.

As Biden took office in January 2021, his administration offered a roadmap for renewable energy’s dominant role to essentially electrify the entire economy. The plan includes a clean power grid in the U.S. fueled by emission-free renewable energy by 2035; a multi-trillion-dollar climate plan to invest and retool energy efficient and renewable projects; a carbon-neutral economy by 2050. These are ambitious goals. Yet, we think these goals can be feasible. We are at a rare convergence of three conditions regarding renewable energy in all major economies: (1) public policy supports, (2) technology-enabled cost collapse, (3) a rapidly rising demand. Private capital typically follows a persistent and large scale at such convergence, an ideal environment conducive to a long-term investment trend. This article will explore the three conditions for the rare convergence, setting up a condition for the renewable energy investments.

I. Global Goals and Supportive Policies to Reach Net-Zero Economy

Many economies worldwide have recently re-affirmed their plans to shift to clean energy to meet their climate goals under the Paris Agreement. In March 2020, the European Commission proposed the EU Climate Law to reach carbon neutrality by 2050. At the U.N. meetings last fall, two countries grabbed the headlines.  First, UK’s prime minister announced its ambition to power all residential electricity needs with offshore wind farms in 10 years, stating “as Saudi Arabia is to oil, the UK is to wind.” Next, President Xi of China unveiled a pledge of achieving net-zero emission for the 2nd largest economy in its entirety before 2060. As the world’s largest manufacturing hub and carbon emitter, this speaks volumes. According to energy consultancy Wood Mackenzie’s recent report, this implies that the country would need to increase solar, wind, and energy storage capacities 11 times higher than current levels by 2050, or about an 8.3% annual increase for next 30 years in my estimation.  Despite its enormity, the goal could be attainable as the country is already a leader in production, technology, and adoption of renewable energy, battery storage, electric vehicles, and other transitions to a low-carbon economy.

The Biden Climate Plan seeks to deploy $2 trillion in climate investment and sets a zero-carbon power sector target by 2035 with a job creation focus. This would boost investments in all renewables, especially solar, given its high employment in installations and services, consistent with Biden’s job creation goals.

Technological advancement solved one key issue facing renewables. Without adequate storage, solar cannot generate electricity at night or on a rainy day. The fast growth of electric vehicle fleets, led by China and Europe, has contributed to an 87% decline in battery costs over the past decade (see chart 4 below).5 Many solar installers reported that affordable storage makes solar installation more attractive and spurs solar panels’ growth.  The cost of solar panels has also collapsed. China’s industrial policy on green transformation helped create some of the world’s largest and high-quality solar panel makers, radically reducing solar panels’ cost to spur the global demand.

Demand for renewable energy, such as solar, has experienced explosive growth over the last decade, at a 49% annual rate, according to SEIA (Solar Energy Industries Association), thanks in part to a federal tax credit program and a rapid decline in the cost of solar production, often at levels now just a fraction of what it used to be.  This rise in demand came from three sources: utility generation, residential and commercial installations (see Chart 2 below).

We expect a fast rise in the share of renewables in the power sector decarbonization process. Non-fossil fuels currently make up about 40% of utility capacity on average in the U.S., representing a huge opportunity for investments toward a 100% clean power grid goal by 2035. According to SEIA, renewables will represent two-thirds of the new utility capacity added in the coming year.

We expect strong corporate procurement and spending of renewable energy for business operations.  Many corporations have made carbon neutral-pledges, including Apple by 2030 and Amazon by 2040.  Google, Microsoft, Ford, Pepsi, Nike, Starbuck are among others making similar pledges.  The world’s largest retailer went even further: Walmart has set zero-emission goals without using offsets by 2040.  The firm even asked its supplier community to make its own plans. The massive corporate rush to meet net-zero emission is targeting large-scale solar panel installations and other renewables spending. According to SEIA, corporate procurement has doubled the solar capacity installations in the past three years alone (as of 2019). We expect such an aggressive pace to continue as more firms rush to fulfill their pledges for net-zero carbon emission targets.

We see a new industrial revolution in progress, led by the green transformation of the economy here and abroad.  The green transformation is propelled by a rare convergence of public policy incentives, business incentives driven by cost collapse, and rising demand for clean energy. Both private sector and public spending are directing massive capital toward the economy’s electrification, reaching carbon-neutral goals in the next few decades. This new industrial revolution represents enduring investment opportunities.

However, near-term risks remain, especially with geopolitical uncertainty. Last October, Trump’s administration announced the proclamation of imposing additional solar import tariffs on Chinese imports, the world’s most extensive solar panels, and equipment producer. This could potentially raise the installation costs to U.S. consumers, slow down the green transition and hurt the green job growth. Under Biden’s administration, there are good reasons to expect more predictable US/China relations. However, it is still unclear at this point if or how quickly Biden intends to reverse the previous trade policies and restore trusts on both sides.  Both the U.S. and China have a lot to gain if the two sides can take bold steps to collaborate in achieving their common goals – battling the climate challenges, managing pandemic and public health crisis, creating regenerative and sustainable economic growth, ultimately reaching carbon neutrality goals by electrifying the economy with clean, renewable energy.

The content herein includes the views, opinions, and analysis of the investment manager regarding the date of publication.  The article is for general educational purposes and NOT for specific recommendations of any investment products or companies.  These views and information are subject to change without notice and are not meant to be a complete analysis of any market, industry, country, or company.