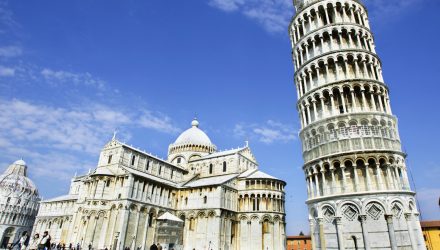 The iShares MSCI Italy Capped ETF (NYSEArca: EWI) traded slightly lower Monday, a day after the country’s elections resulted in a hung parliament. Adding to the concern for Italian financial markets was voters’ preference for far-right, populist parties that are skeptical of the euro.

While Monday’s action in EWI extended a multi-day losing streak for the largest Italy exchange traded fund listed in the U.S., EWI bounced back Tuesday. Still, some analysts and market observers believe risks linger for Italian assets following the election.

“Sunday’s vote has resulted in a hung parliament, with no existing political bloc able to form a majority,” said Fitch Ratings in a note out Tuesday. “Populist parties increased their share of the vote at the expense of more centrist parties. Among individual parties, the anti-establishment, eurosceptic Five Star Movement (M5S) won the largest share of the vote (32.2%), while the right wing Lega (17.7%) outperformed its main partner in the election campaign, the centre-right Forza Italia (13.9%). The ruling centre-left Democratic Party’s share of the vote dropped to 18.9%.”

Italy’s “election comes against a backdrop of a moderate cyclical improvement in GDP growth, which rose to 1.5% in 2017 from 0.9% in 2016. This supported a reduction in the general government deficit, to 1.9% of GDP from 2.5%,” according to Fitch. “Very high public debt, a track record of fiscal slippage, low trend GDP growth and political risk are weaknesses in Italy’s sovereign rating, which we affirmed in October, alongside relatively high net external debt and banking sector weakness.”