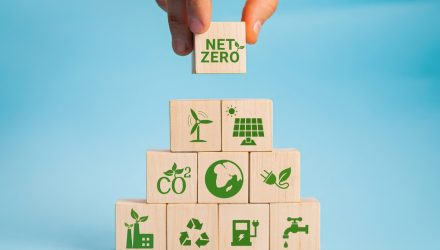 More corporations and governments are prioritizing carbon reduction efforts, but these are long-ranging, capital-intensive plans.

That’s not necessarily a bad thing. In fact, it can be argued that the long-term nature of carbon reduction and climate-based investing is a positive for investors considering exchange traded funds such as the SPDR MSCI ACWI Low Carbon Target ETF (LOWC).

Bolstering the case for LOWC as a long-term idea are data suggesting that while climate-aware spending is increasing, there’s a lot of work that needs to be done to reach various net-zero and carbon neutrality goals set for 2030.

“Low carbon power accounted for 30% of the $1.5 trillion capex spending in the energy sector supply-side in 2021, up from 22% in 2015,” notes IHS Markit. “Transmission and distribution accounted for the largest individual share at 23%, spending in upstream and non-hydro renewables was roughly equivalent at 22% each. Utility-scale solar PV and smaller, distributed PV systems made up together a third of low carbon power spending. Onshore- and offshore wind accounted to 20% and 14%, respectively, the latter benefitting from an unprecedented installation rush in Mainland China.”

Undoubtedly, $1.5 trillion is a massive figure, but to get to where companies want to be on the net-zero front, that $1.5 trillion needs to grow in exponential fashion. Assuming it does, LOWC member firms stand to benefit.

“Cumulative spending in low carbon power during the rest of the decade is expected to exceed $4.4 trillion and reach $530 billion per year in 2030,” adds Markit. “Spending increases are most spectacular for hydrogen generation, increasing from a very low base to nearly US$70bn per year towards the end of the decade.”

In geographic terms, LOWC features exposure to more than 45 countries, which is a relevant trait due to the global nature of the carbon reduction battle. That’s an important feature for multiple reasons. First, climate-related spending isn’t uniform across regions. Second, some of LOWC’s components are poised to capitalize on increasing carbon reduction spending because they are multi-national firms and their revenue streams are geographically diverse.

“Spending increases are greater in the Africa and Middle East region, starting from a low base. Low carbon spending in North America stagnates after a burst in the next few years, as the anticipated phase-out of local tax incentives takes a toll on renewable capacity additions,” concludes Markit. “The share of low carbon in total energy spending increases everywhere except in Asia Pacific where it remains roughly constant at 35%, and the Americas where it drops slightly from 23% to 19%.”