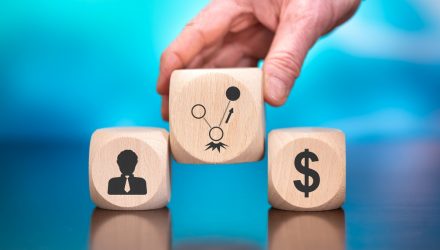 Experienced environmental, social, and governance (ESG) investors know that many of the exchange traded funds in this category are heavily allocated (though not entirely dedicated) to growth stocks. That makes ETFs such as the IQ Candriam ESG US Large Cap Equity ETF (IQSU) potentially attractive ways for investors to position for rebounds in growth stocks without the full commitment of a dedicated growth fund.

Indeed, there’s no denying that growth stocks are taking it on the chin this year, reversing a more than decade-long run of outperformance over value fare. Six interest rate increases by the Federal Reserve are punishing growth stocks, but in what could prove to be good news for ETFs such as IQSU, some market observers are constructive on growth equities for 2023. In fact, it’s possible that high inflation will cease being a drag on growth stocks.

“Despite its sharp inflation, the ‘70s enjoyed the second-largest improvement in corporate profits. Meanwhile, the 2010s experienced both the lowest inflation and the second-weakest profit growth,” noted Morningstar’s John Rekenthaler. “(If you are speculating that the 2010s sputtered because the arrival of COVID-19 ruined the final year’s totals, well considered. However, that hypothesis fails, as I concluded that decade in December 2019.) In fact, those findings imply that inflation improves profits.”

Those constructive comments about corporate profits are meaningful to investors considering IQSU because the ETF allocates 50.4% of its weight to technology and consumer discretionary stocks — two of the sectors in which market participants are fretting about earnings growth.

As noted above, rising interest rates have been a drag on growth stocks this year, implying that growth companies are highly levered to goings-on in the bond market. While there’s no denying that growth stocks are faltering in 2022 at the hands of rising bond yields, such linkages aren’t consistent over long holding periods.

“The link between the behavior of growth stocks and that of the bond market is indeed inconsistent. Over the past year, though, it has been very much in evidence, as witnessed by the correlations between the monthly returns of growth stocks, value stocks, and long U.S. Treasury bonds,” added Rekenthaler.

Looking ahead to 2023, Rekenthaler outlined three scenarios, two of which bode well for growth stocks. Those are inflation topping out and the U.S. economy avoiding recession, and inflation peaking while the economy enters contraction. The latter, though obviously less desirable, could still benefit growth stocks, including some IQSU components, because in a recession, higher rates of sales and earnings growth would be desirable to market participants.