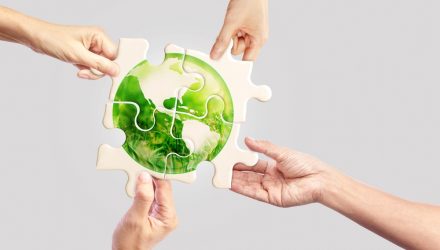 With U.S. stocks slumping, it’s not surprising that international equivalents are out of favor among market participants. The other side of that coin is that there’s bountiful opportunity among ex-U.S. developed market equities ETFs. Investors can even access those opportunities under the umbrella of ESG principles. Enter the IQ Candriam ESG International Equity ETF (IQSI).

IQSI, which tracks the IQ Candriam ESG International Equity Index, is performing mostly in-line with other ETFs tracking the widely followed MSCI EAFE Index this year. That’s not saying much, but there could be hope on the way for international stocks, including some IQSI components. That hope exists in the form of pension funds perhaps needing to step into ex-U.S. equities.

“U.S. fixed income and international equities could benefit from quarter-end rebalancing as pension funds square their books after a brutal three months for most asset classes, according to estimates from several Wall Street banks,” according to Reuters. “Overall, Credit Suisse expects pension funds to buy $30 billion worth of developed market equities and another $15 billion in emerging markets while trimming U.S. large-cap consumer discretionary stocks.”

It remains to be seen if pension funds do in fact step into international equities, but with interest rates rising, those high-level investors may embrace stocks before bonds. Either way, the trend is worth monitoring because these funds have trillions of dollars in capital they need to deploy.

“Wall Street pays close attention to quarter-end moves by pension funds given their potential outsized market influence. Overall, U.S. state and local pension funds have $5.12 trillion in assets under management, according to data from the Federal Reserve, and often rebalance each quarter to maintain consistent asset allocations,” reported Reuters.

As it pertains to IQSI, this potential buying is relevant because when institutional buyers allocate to international stock, they’re typically not buying speculative fare. Rather, they prioritize quality and value — two traits available in abundance across the IQSI roster.

Additionally, as is the case with domestic stocks, international equities ETFs with the ESG label are often less risky than their non-ESG counterparts. So whether by incident or intent, pension funds could buy some ex-U.S. ESG names, potentially benefiting the IQSI roster along the way.