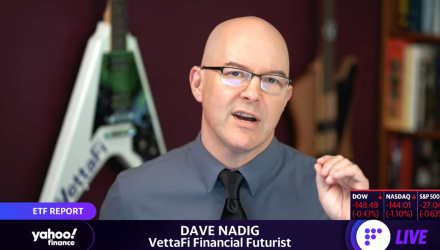 With clean energy getting attention following the passage of Biden’s historic climate bill, Nadig noted, “I think it’s fair to say this is good for the planet, but it’s not necessarily good for every part of your portfolio.” He urged investors to look at use cases, pointing to automobiles and electric vehicles in particular. The Index IQ Cleaner Transport ETF (CLNR), which doesn’t just go after Tesla and the headline grabbers, has exposure to the entire EV ecosystem that is about to be supercharged with $45 billion in investments.

“I think it’s fair to say this is good for the planet, but it’s not necessarily good for every part of your portfolio,” @Vetta_Fi Financial Futurist @DaveNadig says on the Inflation Reduction Act. “Some folks are really trying to cherry-pick here.” pic.twitter.com/qVP7nwMCbU

“The other play there is solar,” Nadig said, noting that the Invesco Solar ETF (TAN) is up 44% in the last three months. “I think we’re going to continue to see that market expand. Not just from the climate bill, but frankly from all of the consumer sentiment that’s been driving toward clean energy for the past decade.” Nadig also noted that the bill is not as awful for traditional energy as many investors might anticipate. Petroleum drillers, in particular, could find a lot to love in the bill.

The BUZZ Around MEMEs

Meme stocks have also been top of mind, garnering a lot of interest in the last week. The VanEck Social Sentiment ETF (BUZZ) and the Roundhill Meme ETF (MEME) both engage with internet sentiment and track meme stocks through Reddit and Twitter.

Nadig observed that the activity in meme stocks has seen new names, like Bed, Bath, and Beyond and Revlon – neither of which are held by BUZZ or MEME. Both BUZZ and MEME do have exposure to more “traditional” meme stocks, such as AMC.

Single-stock ETFs continue to inspire a number of new launches, particularly in leveraged and inverse exposures. “I think investors are looking at these as speculative trading vehicles, particularly around an event like earnings or an index inclusion,” Nadig said, noting that these ETFs can be “another sharp tool in the toolbox,” for active traders but inherently carry risk.